Ants Infest Many Types of Equipment

Many types of electrical equipment are commonly affected in Texas and elsewhere (Eagleson, 1940) (Table 1).

Why and How Fire Ants Are Attracted to Electrical Equipment 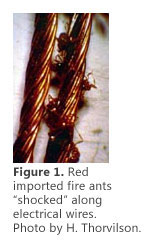 MacKay (1988) described the way in which fire ants impact electrical equipment. However, some controversy continues as to why ants are attracted to electrical circuits and switching mechanisms (Slowik et al. 1996) (Fig. 1).

According to Dr. S. Bradleigh Vinson’s description of Dr. MacKay’s work funded by the Texas Department of Transportation (pers. com.), when switches were open, foraging fire ants tended to stop in the presence of the electric field. If the researcher turned off the electricity, the ants simply moved on. Once an ant is shocked by touching body parts between an open switching mechanism individually or among a group of ants touching each other, the ants displayed shocked reactions and often waved their abdomen (gaster) in the air (called gaster flagging) to release pheromones (volatile chemical communication chemicals) that, in turn, attract other worker ants (Vandermeer et al. 2002).

Arriving ants that touch shocked ants also get shocked. Therefore many, many ants accumulate around a point such as the switching mechanism in a traffic switch box (Fig. 2), causing it to malfunction. This explanation does not address initial attraction to the electrical site. Possibly the ants through random foraging find their way into open switches and get shocked.

In the case of red imported fire ants, another aspect of their behavior also causes problems to electrical equipment. Colonies move into utility

housing and import soil in which to nest (Fig. 6). The result is moisture build-up and corrosion of the housings, a problem frequently associated with malfunctioning transformer units. In addition, ants can chew through coatings protecting wires resulting in possible short circuits. The soil removed from underneath slabs can cause the slab to tilt. When this occurs with a transformer box, the oil in the unit can leak out. Click here to enlarge left image.  Click here to enlarge right image.

Vandermeer et al. (2002) suggest that where ants of any species are very numerous they will, through natural foraging activity, randomly get into the switch boxes, or transformers, etc. They are shocked when they come between live contacts, at which time the pheromone attraction is initiated. Carpenter ants (Camponotus species) have been documented to cause sprinkler irrigation system control boards to malfunction in Florida (Fig. 3). On a circuit board, short circuits may be caused when ants conduct electricity between different circuits. Another documented case involved acrobat ants (Crematogaster sp.) causing an air conditioner unit to malfunction in Austin (Travis County), Texas, resulting in replacement of the entire switching mechanism at a cost of $196.54 (Fig. 4). 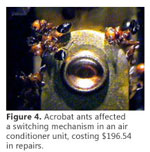 In this instance, once ants were electrocuted, their dried bodies in the switch prevented the switch from closing to conduct electricity.

The new exotic invasive pest ant in Texas, Nylanderia fulva, the “tawny’ crazy ant, previously referred to as the Rasberry crazy ant, Nylanderia (previously Paratrechina) species near pubens, has caused serious problems with electrical utilities in the industrial parks near Houston (Harris County), Texas since 2002 (pers. Com. Tom Rasberry). These ants become abundant in localized areas or spots of infestation. Like other ants, large numbers of shocked ants cause short circuits and clog switching mechanisms in security systems, pumps, and other equipment (Fig. 5).

Treatment for Ants in Electrical Equipment

Drees (1998) has discussed treatment options, including specialty products, to protect electrical units. Most recently, tests by Texas AgriLife Extension Service personnel have shown there are treatments that can prevent ant infestation in transformer units and sprinkler irrigation control boxes (Table 2). A product known as Arinix®, consisting of permethrin impregnated nylon parts that kill ants for a number of years, can protect circuitry and prevent ant colonization of these sensitive units. Mackay (1988) suggested a mechanical solution for enclosed switching mechanisms involving sealing entry holes with glue. See time laps video of Arinix used as a barrier treatment.

We thank Robert K. Vandermeer, Roger E. Gold, Molly Keck and Chris Sansone for their review of this manuscript.

MacKay, W. P. 1988. The impact of the red imported fire ant on electrical equipment, p. 57-64. In Proceedings of the Governor’s Conference, The Imported Fire Ant: Assessment and Recommendations, Sportsmen Conservationists of Texas.