Home > How to Kill Fire Ants > Are Fire Ants Good or Bad? 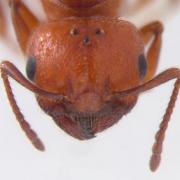 Many aspects of imported fire ants can be beneficial, but they can cause many problems.  In areas where fire ant populations are very high, ants may reduce populations of other ground-dwelling insects, including native ant species, with which they compete.  Misuse and overuse of insecticides applied in an attempt to reduce fire ant populations can lead to surface runoff water contamination. Imported fire ants (Solenopsis invicta and Solenopsis richteri) are invasive species that cause $6.7 billion in annual losses in the United States. And, although fire ants eat certain insects, they protect and encourage population growth among sucking insects such as aphids, scales, mealybugs, and others that produce the sugary liquid called honeydew, which can have damaging effects on agriculture.  Read more >>

Imported fire ants inflict painful stings and can kill human beings.There are large social and medical costs associated with fire ants. Thousands of fire ants live in just one fire ant nest. If a mound is disturbed, hundreds of ants immediately rush out, climb on whatever disturbed them, including humans, and sting. There is some debate about what triggers the ants to sting at the same time instead of individually. Generally, it will take 10 to 20 seconds after climbing up on the victim for the stinging to begin.   Read more >>

Collectively, ants are beneficial insects in our environment. Their nest-building activities reduce soil compaction and help aerate the soil. Many ant species, such as imported fire ants, are omnivorous (they eat just about anything). A major source of fire ant diet consists of other arthropods (insects, ticks and mites, and other groups). Fire ants have been shown to decrease some pest insect numbers.  Read more >>