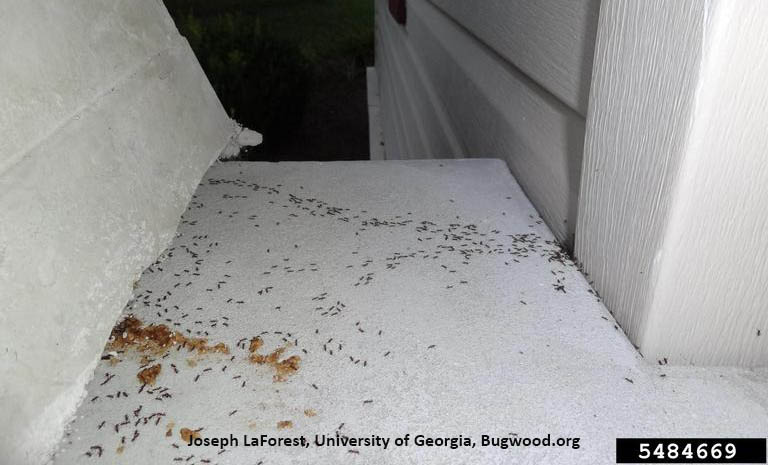 The Argentine ant, Linepithema humile (Mayr) — formerly named Iridomyrmex humilis – is one of the more troublesome ants in the United States. Argentine ants are mainly a nuisance to people because they are often found indoors, forming wide, noticeable lines or trails of ants into homes.  Argentine ants are one of several home-invading ants collectively known as “sugar ants” because they readily feed on sugary foods.

Argentine ants do not sting.  They probably arrived in Louisiana in the 1870`s on coffee ships  from Brazil. They rapidly spread throughout the United States. Entomologists have been trying to control these ants since the early 1900`s. Argentine ants avoid the cold winters by inhabiting heated buildings or by congregating in warm areas such as compost piles. 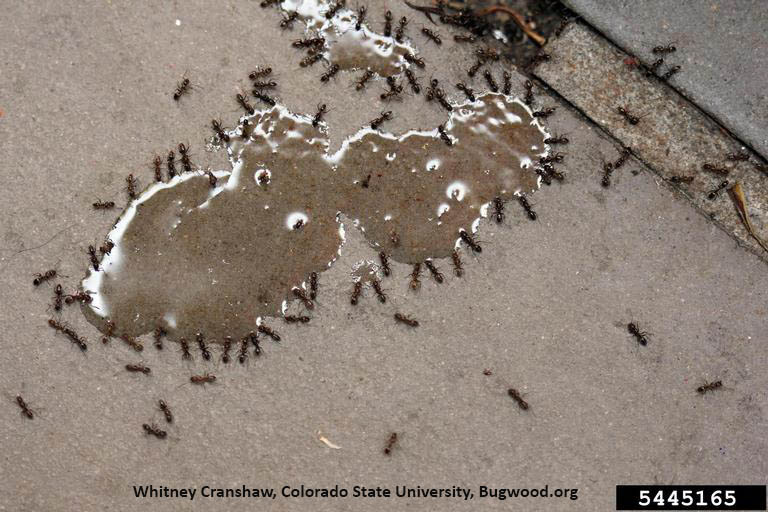 Argentine ants are 2-3 mm in length and black to brown in color, have a one node petiole, and lack large erect setae on the mesosoma.  Argentine ant workers are all about the same size (monomorphic, see image left), in contrast to fire ants, where workers can be different sizes (polymorphic). Workers emit a faint musty odor when crushed.

Colonies are large and can contain many queens. Nests can be identified by the presence of brood. Brood are the egg. larval and pupal stages of the ant. Brood are cream colored to white and immobile, so workers ants must carry them when they need to be moved.

Argentine ants are difficult to control for the following reasons.

These characteristics combine to create a pest control nightmare.  Argentine ant control is an ongoing effort. Due to the large size of the colonies and their rapid mobility, even if one colony is eliminated, another will move into the area over time.

For maximum control make sure you properly identify the ant pest. Different ants have different food preferences and different behaviors that will directly impact the efficiency of control measures.

Collection  Tip — One way to collect ants for identification is to place a dab of honey or sugar water  in the center of an index card. Place the index card where ants are seen. Allow ants to recruit to the sugar source. Put ants on the index card into a plastic bag, then place the bag in the freezer. The cold temperatures will slow the ants down or kill them. When they are immobilized, the ants can be easily tapped into a small vial of alcohol and submitted for identification.

Find the source of the ants. Place bait or granules where the ants are foraging or nesting. Generally, Argentine ant trails will be conspicuous (Figure1). If trails are not obvious, placing an index card with a dab of honey or sugar water where ants have been seen may help locate established trails as ants recruit to the sugar source. In general, treatments are more effective if they are placed where ants are found.

Remove excess leaf litter, decomposing wood, yard debris, and other material along the perimeter of a building that provide harborage and can serve as ant nesting sites.

Eliminate sources of moisture (such as leaky faucets, plumbing, and free-standing water) and food because these ants are scavengers.

Spray the ants with soapy water from a spray bottle. This will often temporarily halt ant problems if insecticide use is of concern around  food or other sensitive areas. Soap breaks the surface tension of the water, making it easier for ants to drown.

Check potted plants for ants before bringing the plants indoors. One way to check for ants is to water the soil thoroughly to force ants out of the soil.

Caulk cracks and crevices in the house.

Keep branches from coming in contact with your house (ants will walk on them into the house).

Apply chemicals judiciously. Precision spot treatments at points of entry into the house such as around window sills and door thresholds may be effective. Broadcast spraying for these ants is unwise. Insecticides are often repellent to ants. Ants will not feed on a bait that is placed in the vicinity of a repellent insecticide application.

Bait stations designed for outdoor and indoor use have been reported to be effective in killing these ants. Look for products with delayed toxicants such as hydramethylnon, abamectin, fipronil, or indoxacarb. The toxicant must be slow-acting to allow the ants to feed the bait to the rest of the colony.  Other active ingredients may be available.  Make sure the label (the instructions and information that come with the bait stations) states the product is a bait to be used for Argentine ant control.

1% boric acid in a 10% sugar solution is a homemade remedy for many sweet-loving ants such as the Argentine ant. There are several disadvantages to this bait. First, it is very slow-acting.  Second, because the colonies are so large, they must be given a constant supply, which means the homeowner would have to repeatedly check on the bait. Even then, control is not guaranteed. The only advantage is that this bait is inexpensive.

Characteristics of the Ideal Ant Bait

Baits work because they exploit the ants’ behavior of sharing food and nutrients with other ants.

Passing nutrients from one ant to another is called trophallaxis. If food contains a slow-acting toxicant and the ant does not detect it, the toxicant is passed throughout the colony by trophallaxis, before killing its members, including the queen.

Ant baits work only if the ants eat the bait. Eliminate any alternate food sources by keeping counters clean and storing food in sealed containers.

Good pest control operators have the training, equipment, and materials necessary to perform ant control safely and effectively. You may prefer to have all of your pest control done by a professional because effective pest management requires extensive knowledge of IPM tactics.

If you do contract the services of a pest control operator, ask questions about the plan to control your pest problems and get estimates from at least three reputable firms before choosing one.

More information on managing ant pests can be found at Integrated Pest Management for Ants.