Carpenter ants are members of the genus Camponotus (Hymenoptera: Formicidae: Formicinae). The name “carpenter ant” comes from the nesting habits of many species, which excavate wood to construct nests for the queen, workers, and brood. There are over 1,000 species of Camponotus worldwide with 60 species found in the United States and Canada (AntWeb  2017, Hansen and Klotz 2005). Carpenter ant workers feed on a wide variety of plant and animal materials including other insects. Ecologically, many species are important to forest ecosystems where their nesting habits become part of the recycling process of fallen timbers. Some species of carpenter ants may become pests when they invade structures to establish either parent or satellite nests.  About 24 species have been linked to damage or as nuisance pests in structures. Some of the worst of these nuisance species include the black carpenter ant, C. pennsylvanicus (DeGeer); the western black carpenter ant, C. modoc Wheeler; C. vicinus Mayr; and the Florida carpenter ant, C. floridanus (Buckley) (Oi and Vail 2011). 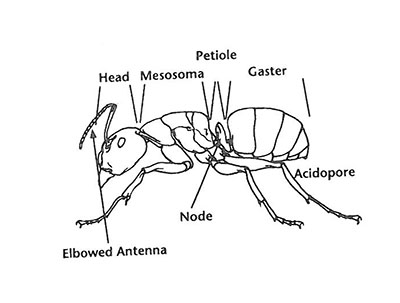 Carpenter ant morphology.  Depending on the species and the age of the colony, carpenter ant colonies vary greatly in size from having only a few individuals to many thousands of workers. Likewise, the size of workers varies among species and even workers within a colony from 1/4 inch to 5/8 inch long. An adult carpenter ant worker has one node on her waist (sometimes called the petiole) and 12 segments on her antennae.  She does not have ocelli (single lens eyes) on her head.  Her mesonoma in profile is gently rounded and she has a ring of hairs at the tip of her abdomen called the acidopore (Oi and Vail 2011, MacGown et al. 2007, Hedges 2010).  Queens are similar in appearance to workers, but are larger, have wings or wing scars (wings are shed after mating) and ocelli.  Males are winged but smaller than the queens and are somewhat wasp-like.

Carpenter ant biology.  A colony consists of the adult forms and brood. The adult forms include a queen and workers of various sizes. Winged forms (which are males and new queens) are produced in late summer and remain in the colony until mating flights occur the following spring. 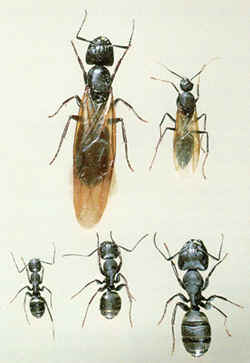 Activities of the workers include foraging, caring for the queen and brood, and excavating nest galleries. Carpenter ants have complete metamorphosis so brood will consist of eggs, larvae, and pupae. After mating, a queen initiates the colony and cares for her first brood until workers are produced. The new workers care for the expanding brood and excavate wood for brood space. Winged forms are produced in older established colonies.  Carpenter ants do not eat wood.  They feed on a wide variety of plant and animal materials such as other insects. They are often found foraging on honeydew from aphids and are attracted to insects on vegetation.

Many species of carpenter ants (Camponotus spp.) nest in wood and may cause serious damage when infestations occur in structures. Runways and galleries are excavated in timbers with opening or “windows” cut at intervals to expel sawdust. Carpenter ants will also take advantage of voids in doors, cabinets, and walls in homes.  Galleries of carpenter ants have a smooth, sand-papered appearance as opposed to those of termites which are filled with debris. Carpenter ants also excavate galleries in sheet-foam insulation and have been found in stacks of shingles, newspapers, and in other types of insulation. Old and new structures may be infested, and sound as well as decayed, wet wood is attacked.

Colonies of carpenter ants can be a single unit, or the colony may consist of a main nest and several to many satellite nests. 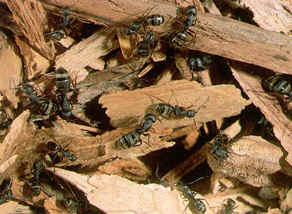 Their nests are found in a number of locations. Some are totally contained in small areas such as within a single wall void or in a stump. Galleries of larger nests may encompass an entire structure with satellite nests in several locations. More importantly, parent nests may be located outside the structure with satellites located within. The latter usually occurs when tree stumps are incompletely excavated or landscaping covers previously established nests in the lawn or adjacent areas. Also stacks of wood may be attractive to founding queens or to established colonies which immigrate to the wood, or a portion of the colony may establish a satellite nest there. Carpenter ants use chemical trails in their foraging activities and well-established trails may be readily visible in lawns. Trails also run underground and surface away from the nest. Trails are found along foundations, sidewalks, or flower beds and run under cement blocks, outdoor carpeting or layers of conifer needles. The number of foragers on trails is dependent upon temperature, time of day, season, and colony size.

Carpenter Ant Management: The key to managing carpenter ant problems is to find and control the main nest and as many satellite nests as possible. Clues to aid in nest location include: 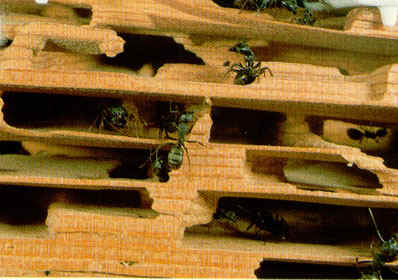 Inspections should consider the possibility of outside nest locations and the movement of ants into and through the structure via wiring and plumbing.

One control strategy is to inject the nest site with effective insecticides.  The use of gel baits designed specifically for carpenter ants has proven effective for some carpenter ant pest species.

The ultimate goal of preventing an infestation of carpenter ants should include:

Adapted from the Summary of Carpenter Ant Biology, prepared by Dr. Laurel Hansen, and posted at http://faculty.spokanefalls.edu/LHansen/

Biology and Management of Carpenter Ants, University of Georgia

Adapted from Summary of Carpenter Ant Biology, prepared by Dr. Laurel Hansen, and posted at http://faculty.spokanefalls.edu/LHansen/