Two examples of insect learning are shown on this page. Red harvester ants don’t normally come into contact with a dime, and red imported fire ants don’t normally have to crawl through columns of small glass beads. Watch the videos and see how these small creatures deal with new situations. 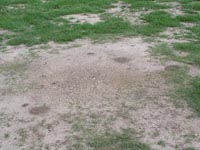 Harvester ant mounds are round and flat.

Nests of red harvester ant, Pogonomyrmex species, usually have one central opening in the middle of a circular area that has been cleared of vegetation by the ants. The circle contains many small pebbles carried out by the ants as they dig their subterranean living space. For more information on this ant species, see the publication Red Harvester Ants.

During her graduate studies at Texas A&M University, Nancy Nicholi was taking the following video when a dime dropped from her pocket onto the ground near the nest opening. She was able to capture the response of the worker ants as they worked together to move the dime away from the clearing around that opening. Movement of the dime on the surface is reminiscent of a planchette or movable indicator point on a ouija board (correctly pronounced “wee-jah” although often pronounced “wee-gee”)! Repeating this experiment, we have found that worker ants of some colonies move the dime into rather than away from the nest entrance. Some may see this as a dumb ant trick. Others may appreciate the teamwork exhibited by these harvester ant workers. 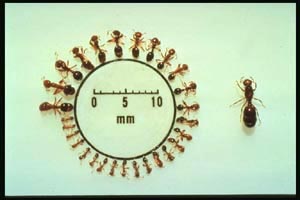 An array of sizes of fire ants compared to the fire ant queen.

For smaller beads (less that 1.0 mm in diameter), the worker ants used their mandibles to carry one or more beads. For very small beads (0.01, 0.02 mm), individual worker ants carried many beads during each excavation trip. For larger beads (0.50, 1.0 mm), the number of worker ants carrying more than one bead decreased until each ant carried only one bead per trip.

Surprisingly, for 1.0 and 2.0 mm beads , individual ants began using their mandibles (jaws) as well as their first pair of legs to form a “basket” to carry the beads. In order to move the beads, the ants turned around and walked backwards using only four of their six legs!

So far, the work by Drees et al. has not found particle sizes that could be used as a physical barrier to prevent imported fire ant penetration. Red imported fire ants range in size (they are polymorphic). As the videos showed, they can dig tunnels by moving particles up to 2 mm in diameter. In a separate experiment where larger glass beads (3.0 mm or larger) were used, smaller fire ant workers crawled through the bigger spaces (0.5 mm or larger) between beads rather than having to move beads to tunnel through them.