Imported fire ants, Solenopsis invicta and Solenopsis richteri (Hymenoptera: Formicidae), are social insects that usually produce hills or mounds in open areas where the colonies reside. These fire ants build mounds in almost any type of soil, but prefer open, sunny areas such as meadows, pastures, parks, playgrounds, lawns, and golf courses, as well as agricultural land and wilderness areas. Often mounds are located in rotting logs and around stumps and trees. Colonies also can occur in or under buildings. Fire ants will not create mounds when the weather is extremely hot (above 36◦C or 96◦F) or dry. At these times they go deep underground during the day and come out at night to forage. Watch a time lapse video of imported fire ants building a mound in a laboratory ant farm. 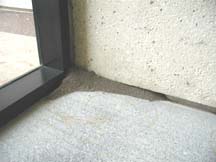 Although not essential to a colony’s survival, the fire ant mound is often the most obvious part of the colony. The height of the mound and the depth to which the core extends into the soil are determined by factors such as colony size and age, soil texture, and moisture. Fire ant mounds (also called nests) are easily recognizable in two ways: by the dome-shaped mounds of fluffy soil, and by the lack of an exit hole in the top of the mounds. There is no hole because fire ants build their mounds by pushing up soil from below. Foraging worker ants enter and exit through underground tunnels radiating out from the mound that open to the surface several inches to many feet away, sometimes up to 30 feet (watch video). 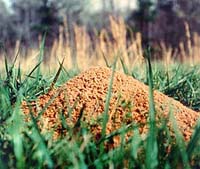 Fire ant mounds may reach 1 to 1.5 feet (30 to 40 cm) high and 1 to 3 feet (30 to 90 cm) in diameter, with entrance holes usually not visible except during swarming or during mound rebuilding after a rain. Inside, the mound is a teeming metropolis of worker ants, all sterile females capable of stinging. Disturbance of mounds results in a rapid defensive response by worker ants, which quickly run up vertical surfaces to bite and sting any objects encountered. 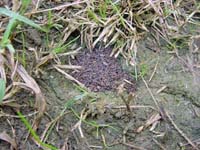 The mounds have interconnecting galleries that are frequently several feet deep (60 to 90 cm), although some tunnels can penetrate to the water table. In response to solar radiation and ambient conditions, fire ants move within the mound seeking optimum temperature for development of brood (eggs, larvae, and pupae), a process called thermoregulation. 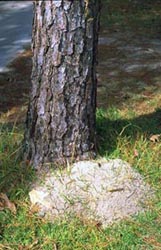 Fire ant colonies or parts of polygyne colonies frequently migrate from one site to another. They can build a new mound several hundred feet away from their previous location and complete it almost overnight. Flooding causes colonies to leave their mounds and float until they can reach land to establish a new mound. Colonies also can migrate to indoor locations.

Fire ants forage when temperatures range from 22◦C (72◦F) to 36◦C (96◦F). Upon locating food resources, they deposit a trail pheromone that directs other worker ants to the site. Fire ants consume many types of food. They are omnivores, feeding on sugars (carbohydrates), some oils containing polyunsaturated fatty acids, certain amino acids, and ions in solution. Although they primarily consume other arthropods and honeydew produced by some types of sucking insects (Hemiptera including aphids, scale insects, mealybugs, whiteflies and some others), they will also consume seeds and other plant parts such as developing or ripening fruit, and dead plant or animal tissues.  For more information see What Do Fire Ants Eat? 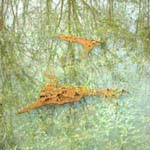 Worker ant mouthparts are used only for biting and chewing. Workers do not ingest solid food particles. Instead, they consume only liquids and particles less than 0.9 microns in size, storing the material in their crops (social stomachs) until it is regurgitated and fed to other worker ants, larvae and queen(s), a process called trophallaxis. Young larval stages (instars) are fed regurgitated liquid food only. However, older larvae can digest solid food particles. Worker ants place bits of solid food in a small depression called a food basket just in front of and beneath the larva’s mouth. The larva digests the proteins externally (extra-orally) by secreting enzymes and by chewing and swallowing smaller particles.

This process is important to understand when it comes to fire ant control. The toxic ingredient used in a bait formulation is incorporated into the ant colony’s food system. If these poisons are distasteful to the ants or work too quickly, not all of the ants in a colony are affected by the treatment. This is why so many of the bait products take several days to begin killing ants.