If it were it not for the painful experiences associated with fire ants, most people might find these creatures fascinating. Their life cycle and social behavior are surprisingly complex. 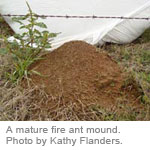 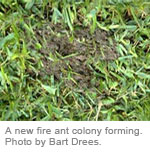 Fire ants live in colonies in nests in the soil. The above ground mound of soil is just a small part of the fire ant nest (see How Tall Do Fire Ant Mounds Get?). The below ground portion of the colony can extend from 1 to 3 feet deep.

Fire ant nests have tunnels that can extend as deep as the water table, thereby providing a source of moisture for the colony even during hot, dry summer months.

Nests also have foraging tunnels near the surface that may extend many feet from the mound. Fire ants use these tunnels to search for and retrieve food.

Fire ants can move within their nests (mounds) both horizontally and vertically to optimize access to favorable temperature and humidity. During extreme heat and drought, the ants go deeper into the ground, and mounds may lose their domed appearance.

This behavior explains why mounds are often not seen during the hotter, dryer months. On the other hand, mounds are built up after rain and therefore are more obvious during rainy seasons.


Life Cycle:  How does a colony become a colony? 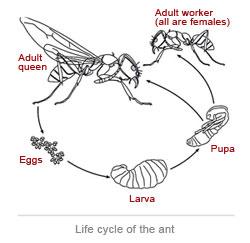 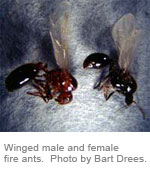 Winged males and females (called alates) fly hundreds of feet up from the ground and then mate in flight.

Mating flights occur most often when the temperatures are between 70 and 95 degrees F., when there is low wind and high humidity, and usually within 24 hours of a rain.

Once mated, the female lands, breaks off her wings, and searches for a place to establish her new colony, of which she is now queen.

Many newly-mated fire ant queens are eaten by predators such as spiders, lizards, dragonflies, other ants, and ground beetles.

Those queens that survive dig small chambers in the soil, where they lay about 25 eggs.

After these eggs hatch the queen feeds them from energy from her digested wing muscles and cannibalized eggs.  She never leaves the colony again.

Visible mounds appear above the turf surface as the colony increases in size, usually within several months.

A fire ant queen can lay eggs that are fertilized or unfertilized with sperm that she has stored in her body since mating:

Developmental stages of fire ants are eggs, larvae, and pupae (collectively referred to as brood).

Single queen fire ant colonies (monogyne colonies) have a one fertile queen that lays all the eggs in the colony.

A fire ant queen can live for 7 years and produce as many as 1,000 eggs per day.


Social Structure:  Roles within the colony 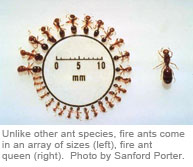 Worker ants build the mound, care for the queen and brood (eggs, larvae and pupae), defend the colony, and forage for food.  Their functions within the colony are determined by the size and needs of the colony and by the ages of the worker ants.  VIDEO: Worker ants tending brood.

Nurse ants are younger workers that tend and move the queen and brood.

Older workers serve as reserves to defend the colony, and construct and maintain the mound.

When a fire ant colony or mound is disturbed, worker ants rush to the surface to defend the colony by biting and stinging while the queen(s) quickly crawl downward to avoid harm.  See VIDEO: Disturbed laboratory colony.

The adult worker ants normally live about 60 to 90 days. In the summer, worker ants live about 35 days. However, in the cooler parts of the year, workers can live for months.

The workers in charge of food gathering carry the food back and share it with the rest of the colony.

Fire ant workers feed liquid foods to other ants in the colony by regurgitating liquids from their crops, a process called trophallaxis.  However, they have a sifting structure in their throats that prevents them from swallowing solid food.

Fire ant workers have to carry solid food back in their mouths and then feed the particles to the oldest fire ant larvae. These larvae externally digest the food using special digestive enzymes. Once the food is digested, the worker ants can take the food byproducts from the larvae and share them with the rest of the colony.

Worker ants can roam far from the nest in search of food, such as other insects, decaying plant and animal material, and plant seeds. Plant nectar is also a food source. 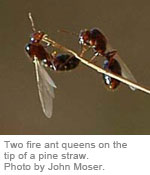 Fire ant control products are often criticized because they control fire ants for a while, and then the fire ants come back.

The lack of permanent control relates to fire ant biology:

There are several other reasons why fire ants come back.