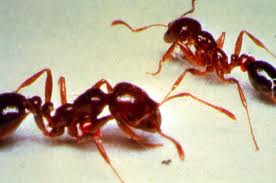 The U.S Department of Agriculture (USDA) and the Animal and Plant Health Quarantine Service (APHIS) work to prevent further spread of imported fire ants by 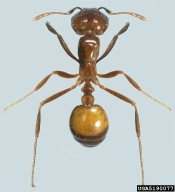 enforcing the Federal Quarantine (7 CFR 301.81) and cooperating with infested states to regulate articles such as nursery stock and soil-moving equipment.

The Soil Inhabiting Pest Section (SIPS) was a USDA, APHIS applied research facility located in Gulfport, Mississippi and moved to Biloxi, MS in 2012. It is now known as the CPHST Biloxi Station. The principal mission of this facility is to conduct applied research on methods of combating the imported fire ant (IFA) with the development of population suppression and quarantine technology as the ultimate objective. This is the facility for developing new quarantine technologies, however the majority of the work is currently outsourced though agreements with universities and other federal entities. Technology and scientific information developed by the Biloxi Station and it’s cooperators is utilized by APHIS, State Plant Regulatory Officials (SPROs), the nursery industry, chemical industry, farmers, ranchers, homeowners, and other stakeholders. The Biloxi Station has developed treatment programs and best management practices for movement of high-risk materials from quarantined counties to non-infested areas for articles such as:

Download/print Labels Available for Use in IFA Quarantine (January 2017)

All states have regulations regarding movement of sod and nursery stock within state that may be different than the federal regulations. In most states, the state’s Department of Agriculture is the contact point for those regulations. However, in some states, this may not be the case. For instance in the state of Kentucky, the state regulatory group is within the University of Kentucky, however a list of all state contacts and links to state laws and regulations may be found on the National Plant Board site.