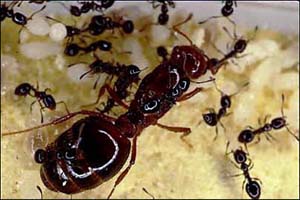 Currently, the best biological control method for fire ants is to preserve other ant species that compete with them for food and nesting sites, attack small fire ant colonies, or kill newly mated queen ants. In some areas outbreaks of other exotic ant species, such as Argentine ants and tawny crazy ants, have displaced imported fire ants. Even imported fire ants from single-queen or polygyne colonies will prey upon newly mated fire ant queens and eliminate small, neighboring colonies. Ants, in general, are considered beneficial insects because they prey upon many other arthropods and collectively till more earth than earthworms, thereby reducing soil compaction. Ways to preserve native ants include preserving their habitat and using insecticides judiciously.

Introducing or conserving the natural enemies (diseases, parasites and predators) of imported fire ants can help control them. These natural enemies kill fire ants or make them less able to compete with other ant species. The most effective biological control organisms for large-scale programs are those that spread by themselves from mound to mound and persist from year to year. A number of species of parasitic “phorid” flies (Diptera: Phoridae), including Pseudacteon tricuspis, P. curvatus, P. obtusus and P. litoralis, have been released and established in parts of most southeastern states. A disease of fire ants, Kneallhazia (=Thelohania) solenopsae, is also widespread in some states. Although natural enemies will not eliminate fire ants and it may be several years before their effect is known, it is hoped that introducing natural enemies of fire ants in the U.S. will reduce their populations indefinitely. In South America, where imported fire ants and their natural enemies originate, fire ant species are not usually considered pests but rather just another ant species. See Natural Enemies of Fire Ants.

Several other parasites and pathogens have been marketed for fire ant control. The predatory straw-itch mite, Pyemotes tritici (Lagreze-Fossat & Montane), feeds on and paralyzes developing fire ants but has not been effective when applied as directed and is potentially hazardous to the user. Parasitic nematodes such as Steinernema spp. are roundworms that enter insects, paralyzing them and developing in their bodies. Species and strains vary in their effectiveness. Strains tested to date caused ants to temporarily move away from the treated mound, but few colonies were actually eliminated. Parasitic fungi, such as Beauveria bassiana strains and formulations, also have been evaluated as individual mound and broadcast bait treatments. However, these agents have not been shown to persist or spread in the environment.

Newly mated fire ant queens, which can start new colonies, are killed by a number of organisms. These include birds, lizards, spiders, toads, dragonflies, robber flies, other ant species, and ants from surrounding colonies. Animals that eat ants, such as armadillos, may disturb mounds and eat some workers, but they are not really useful in control.