Pustules on a baby’s hand from fire ant stings

The biting, stinging fire ant is a nuisance most people are far too familiar with, but few recognize the life-threatening danger these small pests pack in their punch.

Texas A&M AgriLife Extension Service Program Specialist Janet Hurley works with Texas schools to implement Integrated Pest Management practices on campus. She says that fire ant mounds aren’t always visible on the surface, so extra caution should be taken to ensure safety at outdoor events. Weather also plays a role in their elusive behavior. In droughts, fire ants dwell below the surface. When moisture returns, fire ants move up to keep from drowning.

“What I would like for people to understand is that fire ants are a stinging pest,” Hurley says. “There are treatment options available, but it is not a one shot and we are done situation.”

More than one fire ant sting can result in serious medical problems, even in people with normal immune systems. While most people can tolerate stings, severe allergic reaction occurs in less than one percent of the human population. Most people are unaware of their allergy until they are stung for the first time. 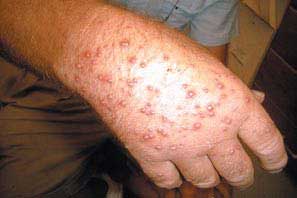 “The percentage is a joke until your child, spouse or parent suffers from a severe reaction,” Hurley says. “Allergic reactions don’t have to start in early childhood, it can happen later in life. We have seen reactions in the elderly as well.”

Retired Texas A&M Extension entomologist Bart Drees says recognizing the threat of allergic reaction to fire ant stings is the first step in avoiding them. “The very young, very old and those with compromised immune systems are a major concern,” Drees says. “Teaching children to recognize and avoid fire ants and fire ant mounds is the best course of action to prevent undesirable and tragic incidents from happening.”