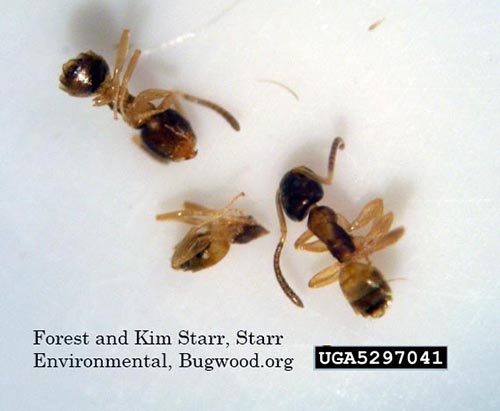 ant, Tapinoma melanocephalum (Fabricius), is a tropical species. This ant species is so widely distributed by commerce that it is impossible to determine its exact origin.  It is believed to be of African or Oriental origin. Colonies of ghost ant have been reported from such isolated locations as the Galapagos I 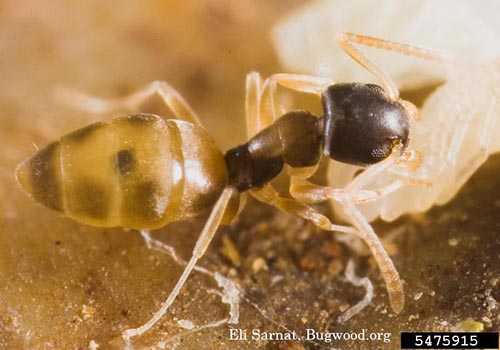 slands to temperate latitudes in greenhouses to colonizing on the Assiniboine River in Canada.  Ghost ants is found in 154 geographical areas and is a common pest in the United States, particularly in Hawaii and Florida. The earliest record of the ghost ant in the United States was in 1887, found in Hawaii and then in Washington, DC in 1894. Currently, ghost ants can be found in the U.S., Puerto Rico and U.S. Virgin Islands. In the northern US, ghost ants tend to be found only in greenhouses and other heated environments.

Ghost ants trailing around the exterior of a home 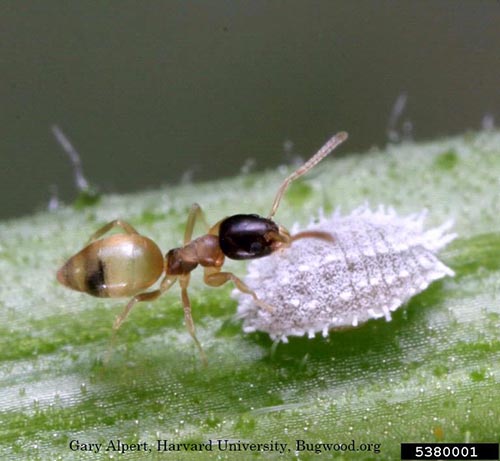 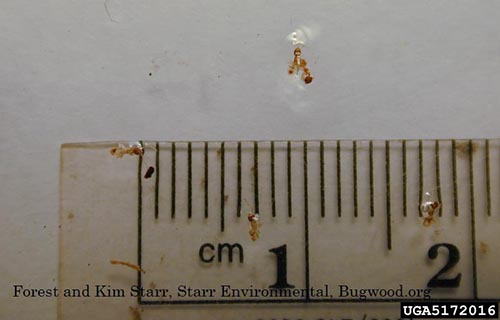 Workers tend to run rapidly and erratically when disturbed. However when the workers are found trailing, their movement is slow, with some carrying brood. Their diet consists of honeydew and dead and live insects. Workers emit a rotten coconut odor when crushed. The colony size ranges from 100-1,000 individuals with multiple queens. New colonies are usually established by budding and it is unknown if they have mating flights. 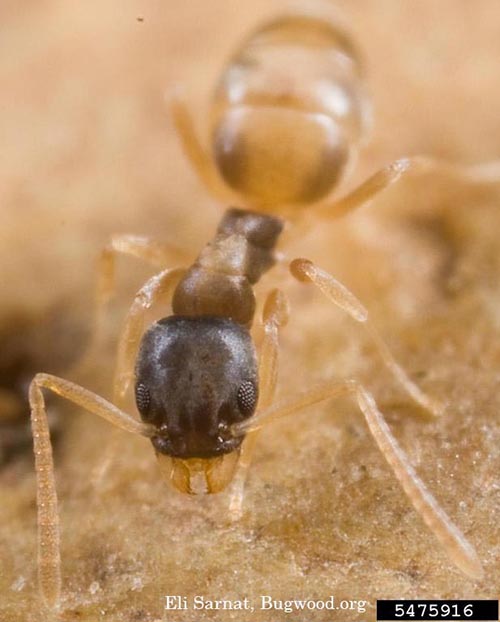 Ghost ants will enter structures from nests near foundations or from plants that contact the structure. Ghost ants are highly adaptable and opportunistic nesters, being able to nest indoors and outdoors.  However, they are susceptible to desiccation so mainly found in humid habitats. They can nest in soil, in flowerpots, under objects on the ground, under loose bark and leaf litter, and at the bases of palm fronds. Indoor nesting sites are usually in potted plants, spaces between cabinets, or wall voids and baseboards. Ghost ants tend to prefer sweets, such as sugar, cakes, and syrups so are mainly found in kitchen and breakrooms indoors. Outdoors, ghost ant workers feed on dead and live insects and tend aphids and other Homopterans for their honeydew. 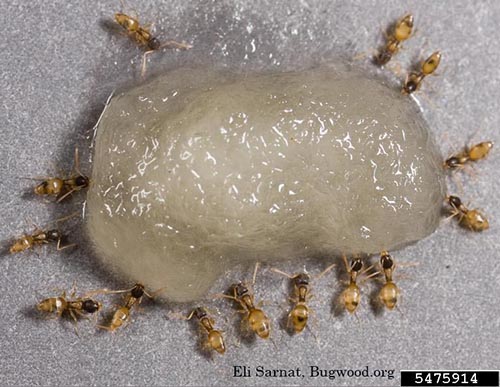 Natural predators of this ant include small beetle larvae, lepidopterous larvae, and two spotted mites, Tetranychus urticae Koch. The best approach to ant control inside of structures is sanitation. Any type of food or food particles can attract and provide food for ants, so food should be stored in sealed containers. Potted plants and landscape plants should be treated to decrease populations of aphids, whiteflies and other insects that produce honeydew. The reduction of moisture sources in and around structures, including condensation and leaks will help control ghost ant populations. Indoor colonies nesting within voids can be controlled with baits. Baits with sugar attractants are usually more attractive to foraging workers.  Access of foragers entering from outdoors through cracks and crevices or screens can be treated with non-repellent insecticides and granular baits can be broadcasted around the structure.