Below is a glossary of terms used in conjunction with fire ant biology and control.

abdomen
the posterior (hindmost) of the three body regions on a fire ant (head, thorax, abdomen)

active ingredient
the material in a pesticide formulation that actually destroys the target pest or performs the desired function; pesticide labels are required by law to show the active ingredient and its percentage; abbreviated as a.i.; for more information, see Finding Active Ingredients on a Pesticide Label

aerate
supply with air or expose to air circulation

alate, alates (pl.)
a winged, reproductive form of some insects

antenna, antennae (pl.)
one of the paired flexible, jointed parts on the head of an insect, used for detecting various environmental factors, such as food or pheromones 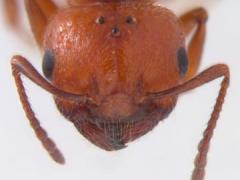 front; the front view of something;  if you looked into a fire ant’s face (see photo), that would be the anterior view.

arthropod
any of a group of animals without backbones, such as insects and spiders, that have a segmented body, jointed limbs and an outer shell that is shed periodically (molted)

bait
food or other attractant used to lure an animal

basal
of, at, or forming the base of something

beneficial
producing or promoting a favorable result; advantageous; beneficial insects are insects that work in ways that are helpful to an ecosystem, like pollination or pest control

biological control
using one or more organisms to control another

brood
the young of certain animals; in fire ants, the eggs, larvae and pupae make up the brood

camouflage
behavior or device used to conceal or hide; a disguise; in biology, a coloration or pattern that blends in with a background and hides an organism, making it difficult to detect; slang=camo

coloration
the color pattern of an organism; an arrangement of colors

competitor
something that competes with another, as in sports or business or nature; a rival

compound eye
an eye composed of many light-sensitive parts (ommatidia), each of which is represented externally by a facet, that focus light on the retina, which helps form an image; most insects have compound eyes

conical
of, relating to, or shaped like a cone

coxa
the basal segment of the leg

cranium
the part of the body that encloses the brain

dichotomous key
a chart used to identify organisms that consists of characteristics that are arranged in twos; see Be An Ant Detective!

dispersal (biological dispersal)
In its simplest form, dispersal is the way species move from one place to another

episternum
an area on the side of the thorax

eradication
in biology, the complete elimination of a species from a geographical area

excavate
to remove by digging or scooping out

exoskeleton
an ant’s outer covering; a protective covering, like armor; it is the exoskeleton that is molted

femur
the third leg segment, located between the trochanter and the tibia

food chain
a series of organisms in community in which each organism uses the next, usually lower, member as a food source

food web
all the food chains in an area

forage, foraging
to look for food

foreleg
one of the front legs

form (noun)
shape and structure of something; stage of development, such as a winged form of a fire ant

fungus, fungi (pl.)
any of a major group of flowerless plants (such as molds, mildews and mushrooms) that do not have chlorophyll and are parasites or live on dead or decaying organic matter

gaster
the hindmost portion of an ant’s anatomy; the rounded part of the abdomen behind the petiole; in Greek, belly

head
the anterior body region that bears the eyes, antennae and mouthparts

hold (noun)
in transportation, the lower interior part of a ship or airplane where cargo is stored

honeydew
a sweet sticky substance excreted by various insects, especially aphids, on the leaves of plants

import
to bring or carry in from an outside source, especially to bring in (goods or materials) from a foreign country for trade or sale

imported
not native or natural to a region or country; moved from one country to another either by accident or by design; imported fire ants are not native to the United States

infestation
a group of organisms in numbers large enough to be harmful, threatening or obnoxious

insect
an invertebrate animal in the phylum Arthropoda, Class Insecta; insects are arthropods classified by three characteristics: (1)segmented body (head, thorax, and abdomen); (2)only three pairs of legs; (3)one or two pairs of wings though some are wingless; imported fire ants are insects in the Order Hymenoptera along with bees and wasps.

integrated pest management (IPM)
IPM is the abbreviation for Integrated Pest Management. IPM is a strategy used to manage insect pests in the landscape by using economically and environmentally sustainable practices. The concept of chemical treatment as a singular means to control plant pests is no longer viable or acceptable. The goal of IPM is not necessarily to to eradicate or eliminate pests, but to strengthen and stabilize the landscape (ecosystem) so that conditions are favorable for plants but not favorable for pests. This is achieved by employing certain practices to prevent or avoid anticipated pest problems rather than treating them once they occur.

invasive species
a species that is foreign to an ecosystem and whose introduction causes or is likely to cause economic, medical or environmental harm; invasive species can be plants, animals, and other organisms (e.g., microbes); human actions are the primary means of invasive species introductions. Source: Online at http://www.invasivespeciesinfo.gov/whatis.shtml, National Invasive Species Information Center, USDA National Agricultural Library

invertebrate
lacking a spinal column or backbone; insects are invertebrates

larva
a young, wingless, often worm-like form (such as a grub or caterpillar) that hatches from the egg of many insects

lateral
of, at, from or to the side

mandible
jaw; an insect has two mandibles which work together with other structures to form the insect’s mouthparts

membranous
having a membrane; somewhat transparent

mesothorax
the middle part of the insect’s thorax

metathorax
the hindmost segment of the insect’s thorax

molt
shed an outer covering or skin (cuticle); in insects, usually occurs during the nymphal or larval stage

morphology
the size, shape and color of an organism; the outward appearance; often the way one species is differentiated from another

mound
the above ground portion of the fire ant nest, part of the area where fire ants have excavated tunnels in the soil where they live

native
originating, growing, produced or occurring naturally in a certain place or region

nuptial
occurring in the breeding season, as in a nuptial flight when fire ants mate

ovipositor
the egg-laying structure on a reproductive fire ant; functions as a stinger on non-reproductives (worker ants)

pedicel
the second segment of the antenna; the stem of the abdomen between the thorax and the gaster (ants)

petiole
a slender, stalk-like body part that connects the thorax and abdomen in certain insects

pilosity
refers to the longer hairs on a fire ant’s body, generally used for tactile perception; however, they also play a role in development in aiding the removal of the pupal or larval skin

polymorphic
occurring in more than one form (morph); colonies with different sizes of ants are polymorphic

posterior
hindmost or rear; the opposite of anterior

potential
the ability of something to develop or become actual

pretarsus
the terminal segment of the leg, typically consisting of a pair of claws and one or more padlike structures

propleuron
the two lateral surfaces of the pleuron of the prothorax

pupa
an insect in the seemingly inactive stage of development (not feeding), the intermediate development stage between larva and adult; pupae=plural; pupate=verb

radiate
to extend like rays in straight lines from a center

reproductives
males and female ants with wings; reproductives fly from the colony into which they were born to mate and start their own colonies

reptile
any of a group of cold-blooded, air-breathing vertebrates, such as snakes, lizards, turtles and alligators, that usually lay eggs and have skin covered with scales or bony plates

scape
the basal segment of the antennae

Solenopsis invicta
the scientific name of the red imported fire ant , a species of fire ant that was brought to the United States from South America; Solenopsis is the genus, invicta is the species; genus and species are always italicized; read more about writing scientific names.

Solenopsis richteri
the scientific name of the black imported fire ant, a species of fire ant that was brought to the United States from South America; Solenopsis is the genus, richteri is the species; genus and species are always italicized; read more about writing scientific names.

species
a category of living things that can produce fertile offspring

spiracles
breathing holes located on the ant’s thorax; part of the exoskeleton (integument)

suture
the line of junction adjoining two body structures, much like a seam

tarsus
the leg segment immediately beyond the tibia, sometimes consisting of one or more segments or subdivisions

taxonomy
the science of classifying and naming things

thorax, thoracic (adj.)
in insects, the body region behind the head, which bears the legs and wings

tibia
the fourth segment of the leg, between the femur and the tarsus

trochanter
the second segment of the leg, between the coxa and the femur

trophallaxis
the mouth-to-mouth exchange of food between adults and larvae of some insects. Watch this video.

tunnels
underground “roads” dug by the fire ants for they can move from place to placeWatch this video.