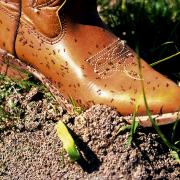 Applied research has primarily been conducted by Texas A&M AgriLife Extension Service. Examples of reports generated from laboratory and field applied research and demonstration efforts can be viewed and downloaded from the Fire Ant Research & Management Project website. One example of a sequence of efforts beginning with laboratory assessment and ultimately verifying efficacy in the field is in the document describing the development of Extinguish (s-methoprene) fire ant bait. See Evaluation of Red Imported Fire Ant Baits Containing Methoprene.

Reports are formatted as PDF booklets, but can be searched or scanned with the Adobe Reader bookmark function.

For individuals or entities interested in learning about how to determine if a fire ant control product is effective, see Fire Ant Management Product Evaluations.

The Soil Inhabiting Pest Section (SIPS) is an applied research facility located in Gulfport, Mississippi. The principal mission of this facility is to conduct applied research on methods of combating the imported fire ant (IFA) with the development of population suppression and quarantine technology as the ultimate objective. This is the facility for developing new quarantine technologies. Technology and scientific information developed by SIPS is utilized by PPQ, USDA’s State Plant Regulatory Officials (SPROs), the nursery industry, chemical industry, farmers, ranchers, homeowners, and other stakeholders. This agency has developed treatment programs and best management practices for movement of high-risk materials from quarantined counties to non-infested areas for articles such as:

The NAPIS Pest Tracker website publishes survey maps for pests of agricultural and forest commodities and provides links to pest news and information. The National Agricultural Pest Information System (NAPIS) stores and manages pest survey data that is collected by CAPS and other PPQ survey programs. Detection surveys are one tool used to manage the introduction of exotic pests.

The Texas Department of Agriculture (the department) adopts, on an emergency basis, an amendment to §19.101(b) in order to expand the quarantined area for the red imported fire ant, Solenopsis invicta Buren. The department conducts annual detection surveys in the counties bordering the red imported fire ant quarantined counties to monitor the sporadic encroachment of fire ant infestations. The detection surveys conducted in 2008 and in prior years indicated that Archer, Baylor, Callahan, Clay, Coke, Coleman, Concho, Crane, Crockett, Fisher, Haskell, Howard, Irion, Lubbock, Martin, Mitchell, Nolan, Reagan, Runnels, Schleicher, Scurry, Shackelford, Starr, Terrell, Throckmorton, Upton, Ward, Wilbarger, and Winkler counties have a widespread fire ant infestation beyond containment. The emergency action will slow the artificial spread of fire ants through movement of hay and nursery-floral commodities to fire ant-free areas. The nursery-floral articles from these counties will be allowed to move to the fire ant-free areas only after USDA approved quarantine treatments. Hay may only be shipped to fire ant free areas if it is stored in a manner that prohibits direct contact with the ground.

The department believes that it is necessary to take this immediate action to prevent the artificial spread of the red imported fire ant into non-infested areas of Texas and other states, and adoption of this quarantine on an emergency basis is both necessary and appropriate. The nursery industry as well as the hay producers in the non-infested counties are in peril because without this emergency quarantine their chances of becoming infested increase significantly. Once infested, they would be borne with the treatment expense to ship regulated articles to non-infested areas of Texas and other states. In addition, the U.S. Department of Agriculture is pressuring the department to quarantine the infested areas to reduce artificial spread of the ants to other states.

Amended §19.101 expands the quarantined area in correspondence with the detection of the red imported fire ant outside the current quarantined area. The department will be proposing adoption of this rule amendment on a permanent basis in a separate submission.

The amended section is adopted on an emergency basis under the Texas Agriculture Code, §71.004, which provides the Texas Department of Agriculture with the authority to establish emergency quarantines; §71.007 which authorizes the department to adopt rules as necessary to protect agricultural and horticultural interests, including rules to provide for specific treatment of a grove or orchard or of infested or infected plants, plant products, or substances; and the Texas Government Code, §2001.034, which provides for the adoption of administrative rules on an emergency basis, without notice and comment.

This agency hereby certifies that the emergency adoption has been reviewed by legal counsel and found to be within the agency’s legal authority to adopt.

Filed with the Office of the Secretary of State on November 5, 2008.

The Texas Department of Agriculture implements the quarantine regulations in the state and continues to survey additional counties for the spread of this pest to new areas.

Other maps are available at the Fire Ant Plan website.

(a) Quarantined articles include:

(b) Any other products, articles, or means of conveyance of any character whatsoever, not covered by subsection (a) of this section, are quarantined articles when it is determined that they present a hazard of spread of red imported fire ants and the person in possession thereof has been so notified.

However, certain restrictions apply. From Rule 19.103:
(a) Quarantined articles from the quarantined area are prohibited entry into or through the free areas of Texas, except as provided in subsections (b) and (c) below:

(b) Exemptions. The following quarantined articles are exempt from permit requirements:

(c) Exceptions. Shipments from quarantined areas are allowed entry into or through the free areas under the following conditions:

For movement of hay bales: