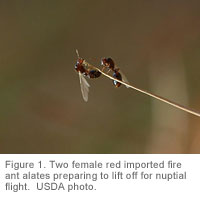 One way fire ants ultimately establish new colonies is to disperse through mating (nuptial) flights (Fig. 1). During these flights, winged male and female fire ants (called alates) leave the nest, fly high into the sky and mate.  These flights occur throughout the year, but occur most often between May and July.  The mated females, now called queens, fly on to establish new ant colonies. 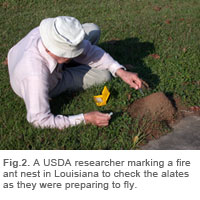 It is known that various arthropods (insects and mites)  live inside fire ant nests. This is a form of commensalism.  Most or all of these species disperse to new nests by hitchhiking with the ants on the mating flights.  This hitchhiking is called phoresy.

Nine species were found to consistently hitch rides on winged fire ants.  This indicates that the more common species, such as Oplitis moseri, may live in the fire ant nest for the entire year, and that large numbers may accompany peak ant alate flights. Fourteen of the 27 species collected were categorized as accidental, implying that the alates inadvertently picked up the mites from nearby sources such as grass, soil or tree bark.  This finding suggests that many small arthropods may routinely use phoresy as a dispersal mechanism (Fig 3.). Many of the mites found are associated with fungi. Several types of spores (the reproductive structures of fungi) from inside fire ant nests were found on the cuticle of various mites (Fig. 6). Scientists don’t know yet what these arthropods or microbes feed on in the fire ant nest, so it is difficult to determine which are beneficial or destructive to the fire ant.  However, relatives of some of these organisms are known to feed on other insects, suggesting that they may be used as beneficial biological control agents for this ant.

The same phoretic arthropods found in Louisiana have also been detected in other countries, such as China, where the red imported fire ant was recently introduced (Fig.7).  This means that the common associates could have originated in Brazil and dispersed when the fire ant first invaded the United States. 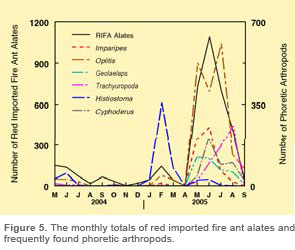 Table 1. A list of the arthropods removed from red imported fire ant alates. The species are organized by taxonomic Superfamily or Family. Numbers of each species are given, as well as the name of the taxonomic identifier.