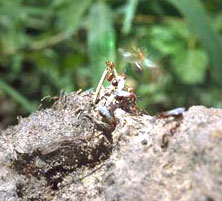 The alates (winged forms) of fire ants are most abundant in late spring and early summer, but they can be found at any time of the year. The winged forms are reproductives.

Males can be easily distinguished from female alates. Males are decidedly smaller, glossy black and have a small head.

Although both alate males and females can be found in the same colony, as a general rule one form will be dominant.

Nuptial flights of fire ants most often occur in the middle of the morning 1 or 2 days after a rainfall if the temperature is above 72 °F and the wind is light. The males fly first and await the females in the air. The female alates emerge and take flight, rising into the cloud of waiting males. They mate in the air. After mating, the male dies and the newly mated female lands, sheds her now useless wings and begins searching for a suitable nesting site to start a new fire ant colony.

Next: Communication within the family >>

Back to Lesson Index