Once imported fire ants are detected, the next step in developing a sound IPM plan is to assess the ants’ population level. The same techniques will also be used to assess the impact of any treatments applied. Historically, this has been accomplished by documenting the number of active ant mounds per unit area. Although all active ant nests in the treated area, such as the number of mounds in a yard, can be counted, in larger areas, sub-sampling using square, transects of a certain width and length, or circular monitoring plots have been used (Fig. 1). To sample in circular plots, a stake is placed in the center and a string, cord or measuring tape of a known length forms a radius from which the area sampled can be measured. For instance, a radius of 17.7 m will create a 0.1 ha or 980.1 sq m subplot (58.9 ft will create a 0.25 acre or 10,899 sq ft subplot) and active mounds can be detected by walking along the radius as it is moved around the full circle (watch video). 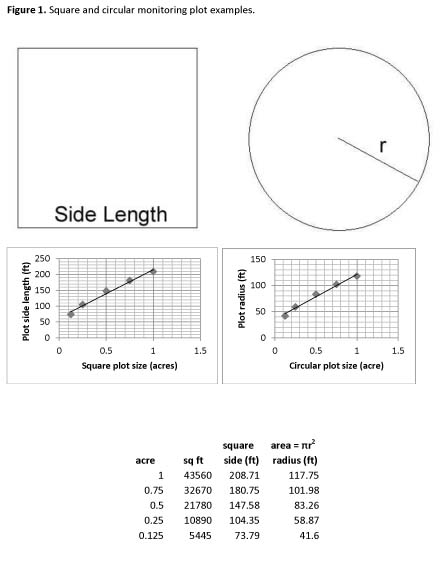 Active mounds can either be counted directly or assessed using some type of rating scale assessing size, ant numbers and/or presence of worker brood (larvae and pupae)(Banks et al. 1988, Lofgren  and Williams 1982)(Table 1). The minimal disturbance method counts ant mounds as active when a dozen or more emerge from a suspected ant mound when disturbed with a stick or similar object (Drees & Vinson 1990). Ant mound ratings require shoveling into a mound to reveal brood, which is a semi-destructive method, used more commonly in research to assess product performance and insecticide mode of activity. Mound count data are relative measures of fire ant abundance because some colonies are too small or nest below the surface to be detected.

However, in some areas such as hot desert environments or during hot dry weather conditions, imported fire ants do not often produce visible mounds on the surface. Alternatively, the terrain may prohibit ant mound number assessments. In such cases, numbers of foraging ants can be monitored using food lures such as meat products (e.g., hot dog slices, tuna fish, processed meats), fried vegetable chips (e.g., corn or potato chips) (Drees 1994)(See: Common ant species at food baits. Lures are placed either randomly or in a pattern within the monitoring area during times of the day when temperatures (between 18.3 to 35°C or 65 and 95°F) allow foraging activity (Drees et al. 2007). After 45 to 60 minutes, fire ants on each lure are counted or estimated and results are averaged over the entire area. This method documents relative abundance of fire ants and results have been correlated to ant mound numbers; an average of 30 ants per 10 hot dog slices is estimated to equal  20 ant mounds per acre (Calixto et al. 2011).

Depending on the site, action levels may vary. In sensitive environments such as areas with public access or areas containing organisms of ecological concern that can be affected by these ants, the treatment threshold may be a single live ant or colony. However, in pastures and larger treatment areas, an action level of roughly 50 mounds per ha or 20 ant mounds per acre (Drees et al. 2006) or an average of 30 to 40% of hot dog baits positive for fire ants or roughly 30 ants per 10 hot dog slices (Calixto, personal communication) has been promoted. This population level indicates that, 1) imported fire ants dominate the surface and competitor ant species are likely to be suppressed, 2) sufficient numbers of foraging fire ants are present to collect insecticidal bait particles scattered after broadcast application of an ant bait product, and 3) a broadcast bait application is likely to be less expensive than treating individual mounds.

Drees, B. M., and S. B. Vinson (1990) Comparison of the control on monogynous and polygynous forms of the red imported fire ant (Hymenoptera: Formicidae) with a chlorpyrifos mound drench. Journal of Entomological Science, 25, 317-324.