The Museum of Novel Fire Ant Control Methods and Products was developed to address the interest in fire ant control practices and products that have been proposed or marketed over the years. These constitute excellent examples of ingenuity in the U.S. and worldwide.

Mention of any particular product or practice does not constitute an endorsement for its use by eXtension or any Community of Practice member institutions.

For most methods, the claims made by the manufacturers, distributors or publishers of these methods or products have not been verified by scientific tests. Any references, links, or contact information may no longer be available and are given here for historical purposes only. Information may be useful to those considering pursuing their unique or novel idea for solving the fire ant problem.

This information was presented, in part, at the 1997 meeting of the Entomological Society of America (Grossman 1998). View the PDF version of the original PowerPoint slideshow, “The Red Imported Fire Ant Meets American Ingenuity.” In 2008, several of these items were displayed in an “Alien Invaders” exhibit at the Brazos Valley Museum of Natural History in Bryan, Texas. 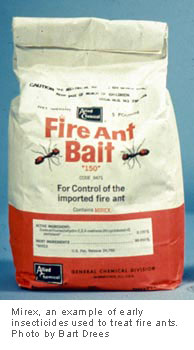 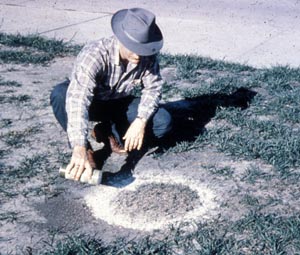 Ever since the imported fire ant was first identified as a new exotic pest in the southeastern U.S.in the early 1940’s, treatments have been developed for use against them. Early insecticides included chlordane, heptachlor, mirex and other early insecticides (Williams et al. 2001). Home remedies such as boiling water and petroleum products were commonly used to treat ant mounds (Drees and Lennon 1998, Tshinkel and Howard 1980). Over time, many U. S. patents have been issued on fire ant treaments or control processes See Appendix 1.

Possibly the first non-chemical fire ant control device, the McCoy Ant Stomper was a windmill. Although marketed for fire ant control, it was developed in Lubbock, Texas to control the red harvester ants that emerge from their mounds using central openings. As the windmill turned, a heavy metal roller at the base was activated to “run over” worker ants emerging from the mound. The McCoy Ant Stomper was advertised in the Progressive Farmer magazine around 1978. A replica was built by E. N. Bennett in 2000, who claims they were originally built in 1910 to kill “cut ants” in Kansas. Note: “cut ants” are suspected to by Pogonomyrmex species of harvester ants because leaf-cutting ants in the genus Atta, do not occur in the state).

The Queen Smasher (patent pending), marketed in Alabama, consists simply of an iron weight in a handle and is intended to be used to stomp on ant mounds, crushing as many ants as possible. (Patent pending, Creative Technologies, Inc., 1400 Commerce Blvd., Anniston, AL, 1-877-FIREANT)

Attempts to shovel out or use vacuum or other devices to remove imported fire ant colonies from the field have been promoted over time. One result demonstration was conducted to evaluate the success of field removal/shoveling mounds into a bucket of soapy water.

Use of very hot or boiling water was proposed by Tschinkel and Howard (1980). Subsequent studies have verified that this method attains about 60% elimination of treated fire ant mounds.

A number of devices have been developed and marketed to heat water or produce stream to apply to ant mounds. Application is labor intensive and heating water can be expensive. Use of very hot liquid, like hot coffee, can also be hazardous to people and plants nearby.

There have been many proposals put forth to inject liquid nitrogen into ant mounds to freeze colonies. However, devices or services have not been introduced to date and no data supporting the effectiveness of this proposed method are available. 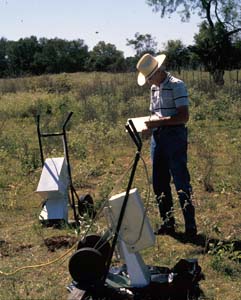 Heat produced by microwave devices has been proposed for use as a fire ant control method. One device has been evaluated (personal. communication, R. E. Gold) caused ants to move away from active devices, but treatments were not effective in causing colony death.  Photo:  Using microwaves to kill fire ants. Photo by Bart Drees.

Reports of hooking up a hose to the tailpipe of a vehicle or lawn mower and inserting the hose into a fire ant mound to suffocate them with carbon monoxide have been received. Non-combusted petroleum products or residues would undoubtedly be potential environmental pollutants. This treatment could also be fairly expensive, depending on the cost of the number of “mounds per gallon.”  Photo: Using exhaust fumes to kill fire ants. Photo by Sanford Porter.

This electric fire ant killing device was donated in 1987 by J. R. McRacken of Bryan, Texas, son of the inventor. It uses 10 watts of electricity to electrocute ants attempting to crawl up the charged metal coil at the base of the device. Literature accompanying the product claims that the ants’ behavior was altered so that the ants “attack one another” and “fight each other to the death.” This device was evaluated by Dr. Bart Drees in 1998. A similar product was the Electric Anteater© (see photo above).

The Solar Ant Charmer, developed in 2004, uses solar power to shock and stun ants crossing an electrically charged rim at the top of a cone, causing them to fall into a cone into powder provided, where they die. Placed into the top of an ant mound, worker ants emerging to defend the colony are affected. However, queen ants and brood (eggs, larvae, pupae) are not affected.

The Electracat was touted as “The Ultimate Non-Chemical Pest Control System.” It produced low frequency vibrations designed to repel ants over areas as much as an acre. The device was marketed for over $700 in the late 1980’s. When tested in the laboratory, no effect was observed on colonies (S. D. Porter, pers. com.). When tested in the field, one colony moved its nest under the device, probably because the worker ants found the heat produced by the device attractive.

Teflon® aerosols and Teflon-like substances have been developed for use as barriers, preventing foraging ants from crawling up vertical surfaces.

Fluon is a material similar to Teflon and is used in laboratories that work with fire ants. Ants are unable to crawl up vertical surfaces painted with this material (Drees 2002). Baby powder or talcum powder dusted surfaces are also effective barriers used in field operations to dust rubber boots and inner vertical surface of buckets used to collect ants and soil from mounds.

A number of pet bowls have been developed and patented to prevent ants from foraging on pet food. They use moats or other barriers. Fool-A-Bug® allows ants to climb up an inner rim, but when the rim causes them to crawl downwards many do not persist and fail to gain entry into the bowl’s interior, thereby providing a behavioral barrier.

Drees (2007) describe use of temperature extremes as barriers for fire ant foragers. Ants did not forage when temperatures were less than 10 or greater than 50 degrees C. Barriers can be made from heating elements such as wires, with temperature controlled using a rheostat. Drees, Summerlin, Vinson, 2007, Foraging Activity and Temperature Relationship for the Red Imported Fire Ant.

These rubber boots were developed for people and horses to prevent ants from climbing beyond a ring of heavy pile fabric at the tops of these garments. Foraging ants evidently failed to navigate through the material while attempting to climb vertically, similar to the concept behind Fool-A-Bug devices.

Many food grade and cleaning products have been suggested as ingredients for control of red imported fire ants. The list is almost limitless and includes sugar, aspartame, instant grits, vinegar, soaps, oils, petroleum products, soil amendments. Some have been introduced as products while others remain home remedies. Limited laboratory and field trials have been scientifically conducted to support or refute claims made by proponents. Some of these products are:

Red imported fire ants forage for food away from the colony. Some people believe that when they scatter instant grits around a colony, ants consume the particples and kill ants when the swell inside their digestive systems. In reality, worker ants are incapable of ingesting large solid food particles due to a structure, the buccal tube” that acts as a filter as described by J. M. Petti (1997): “Solids are inevitably consumed by worker ants during grooming as well as foraging, but are excluded from the ants’ liquid diet before food is ingested. The unique filtering capability is facilitated by two structures that have evolved to become integral parts of the ants’ alimentary tract. The buccal tube (BT) is a narrow passageway, lined with setae (hairs), leading from the oral cavity to the pharynx. Particles that are too large to pass through the BT are retained within a ventral infolding of the oral cavity, the infrabuccal pocket (IBP). If particles of a specific size are fed to an ant and the number of particles recovered from its IBP is divided by the total number of particles recovered from both the IBP and the crop, the resulting ratio provides an estimate of the ant’s filtering effectiveness at that particle size. Matrix-bound, micro-encapsulated, or microbial control agents whose delayed mode of action requires ingestion would be unlikely candidates as potential formicides for ant species who could, due to particle size, exclude them from their diet.” The red imported fire ant workers are extremely effective at excluding 82 percent of 0.2μm diameter microspheres from a sugar water solution. At diameters of 0.5 and 0.75μm, workers filtered 98 and >99 percent of microshpheres, respectively. No microspheres with a diameter of 1.0 or 1.8μm were recovered from the crop of any worker (From: John M. Petti. 1997. “A comparison of food filtering efficiency in workers of the red imported fire ant, Pharoah ant, and Florida carpenter ant”, pp. 97-98, in Proceedings of the 1997 Imported Fire Ant Research Conference”, Gainesville, FL).  See research results on using instant grits as an ant bait

Organic and Other Home Remedies and Treatments

Application devices have been developed for numerous formulations of insecticides. Although insecticide products do not prohibit use of novel application methods or devices (except for chemigation or aerial application methods), manufacturers of these products do not endorse use of many of these methods and treatments must still be made in compliance with instructions provided on the label.

There are three approaches to biological control:

2. Augmentation refers to the purchase and release of natural enemies to help suppress a pest population. These agents often do not persist in or spread in the environment and are applied more like “bio-pesticides.” In fact, agents (like bacteria, viruses and fungi) that are not multicellular organisms (like nematodes) are regulated as microbial insecticides by the Environmental Protection Agency (EPA). Examples of augmentive biological control agents that have appeared on the market include:

3. Conservation means the preservation and encouragement of natural enemies, such as the preservation of native and exotic ant species that compete for resources and nesting sites against imported fire ant, providing biotic resistance as past of the overall biological control program for these exotic invasive pest ant species.

Below is a list of patents from FORMIS that likely apply to the topic provided by Sanford D. Porter, Research Entomologist, USDA ARS).