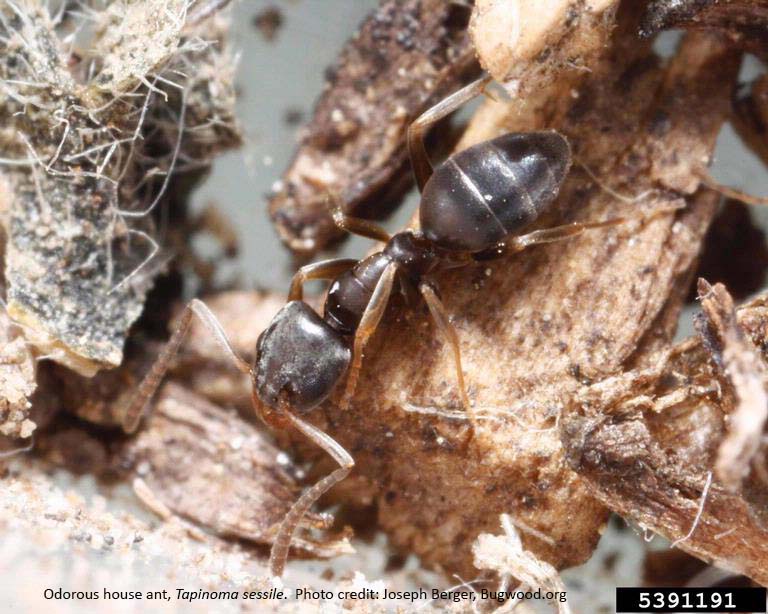 The odorous house ant, Tapinoma sessile (Say), is considered a pest when it enters structures searching for food, water or nest sites. It cannot sting because it lacks a sting and will likely only bite if you stick a hand into its nest and vigorously disturb the colony. Occasionally winged reproductives found at lights concern residents too. Odorous house ant is common throughout the United States and is the second most common pest ant managed by professionals.

Odorous house ant is a small native ant species found in the United States, southern Canada and Mexico. It survives in a variety of environments found from near sea level to elevations of more than 2 miles and can be found in all the continental states. It’s possible that odorous house ant is really four similar-looking species, but until more data are produced to support this hypothesis, we’ll consider it as one. In 2009, it was discovered on the island of Maui, Hawaii and is now characterized as an invasive species.

Odorous house ant is about 1/8-inch long, dark brown to black and smells like rotten coconut with a hint of other odors when crushed. Its waist is one segmented and lacks an obvious node or bump which easily distinguishes it from other small dark ants, including the Argentine ant. The gaster or abdomen overhangs the waist making the waist difficult to see. Odorous house ant lacks a sting or acidopore (circular ring of hairs) at the end of the gaster, but instead has a slit-like opening on the ventral side of the gaster one segment in from the tip. All odorous house ant workers are the same size or monomorphic. 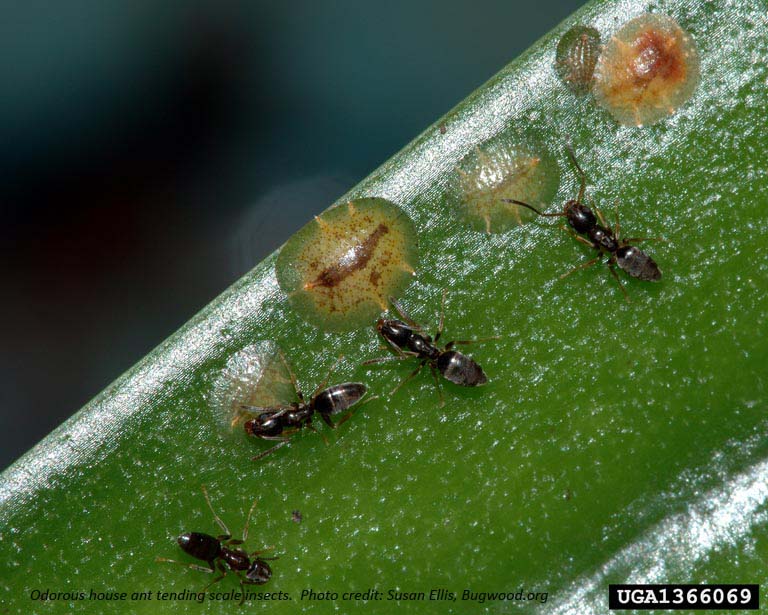 In addition to their smell, odorous house ants are accurately named as they are often found foraging along the outside base of a home.  Increased indoor activity is often associated with rain. Odorous house ant activity can be observed during the day and night and will be found foraging outdoors in greatest numbers when temperatures are between 70 and 86 degrees F. Odorous house ants use edges, ridges or other guidelines to move from one place to another. Natural (vines, trees and shrubs) and man-made (siding, ground/foundation wall interface, wires, pipes, conduits, baseboards, counters and others) objects may serve as guidelines. Outdoors, OHA feed on dead and living insects, dead animals (including those deposited by the family cat), pet food, plant nectar and liquid excrement (honeydew) from aphids, scales and other sucking insects. Indoors, they feed on sweets and other human and pet foods. Odorous house ants are often found foraging to water sources and kitchen and bathroom garbage cans.

Odorous house ants do not build nests within mounds of soil, rather they nest opportunistically. Outdoors, odorous house ant nests in pre-existing spaces that provide some moisture and protection from the sun. They may nest under, near or in logs, landscape timbers, stones, patios, leaves, debris, siding including that laid on the ground, stacked wood or firewood, mulch, pine straw, bee hives, dog houses and near iris rhizomes. Indoors, they may be associated with food or moisture and can be found beneath edges of carpets and toilets, in cabinets or drawers, near or under garbage cans and other similar places. Indoor nests are often associated with outdoor nests. Often many nests are present outdoors and a few may be found inside. 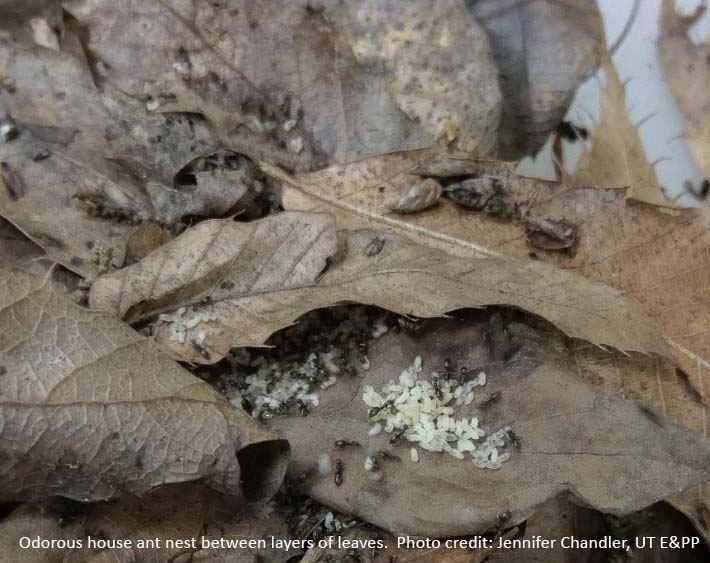 Odorous house ants have many queens per colony (polygyne) but queen number varies. In natural situations, such as forests, colonies tend be small with one queen (monogyne). However, in disturbed, urban environments, many queens and tens of thousands or more workers may be present in a colony that has many nests. Workers are more dominant when present in larger numbers (urban environments) than smaller numbers (forests).

Check with your local Extension service for product recommendations as pesticide registrations differ in each state.

Don’t let tramp ants take over your home, an All Bugs Good and Bad eXtension Webinar