The pharaoh ant, Monomorium pharaonis, is one of the smallest (2 mm-long) indoor ant pests. It is most easily distinguished from the equally tiny dark rover ant by its lighter yellow to orange color; however close examination will also reveal that it has 2-segmented pedicel, and a 12-segmented antenna with a 3-segmented club. Thief ants (Solenopsis molesta complex) are very similar in appearance to the pharaoh ant; however they have a 10-segmented antenna with a 2-segmented club. Being able to distinguish between thief ants and pharaoh ants can be important, as the thief ant is an occasional invader of structures but does not generally live indoors or require control. Misidentification of thief ants as pharaoh ants may result in unnecessary and costly treatments.  Little fire ant is also similar, but it is found only in restricted areas of Hawaii and Florida and has spines on its thorax. 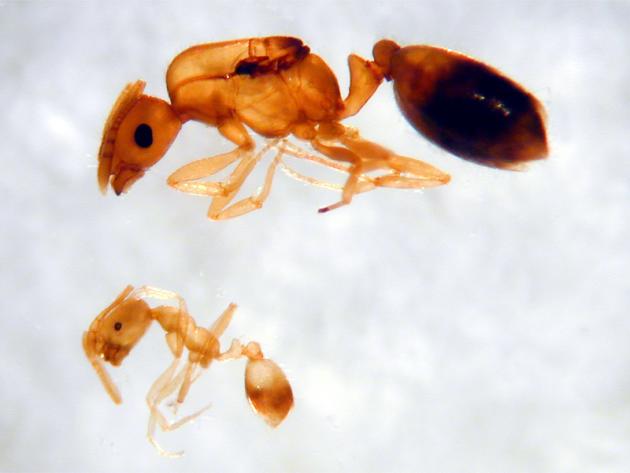 Pharaoh ants are tropical in origin, and do not tolerate cold weather in temperate and northern climates. They will thrive indoors in cooler climates, however, and are considered important pests of human structures worldwide. Although they possess stingers, pharaoh ants do not sting humans.  They are principally nuisance pests and can be found nesting in any narrow crevice, including under clothing in drawers, between sheets of paper, in voids of window and door frames, in electrical outlets and under insulation in walls, ceilings and attics.  Pharaoh ants do not produce swarms of flying adults, but colonies spread via budding (division). Multiple queens may be found in a single nest. This fact means it is easier for colonies to split or fragment and spread throughout a building, thus making elimination difficult. Pharaoh ants also may mechanically transport pathogens and are particularly troublesome in hospitals and other health care facilities where they can enter sterile packaging, wound dressings and IV tubes, or where they may be attracted to IV fluids or body fluids of patients. Like many other ants, pharaoh ants have an affinity for electrical fields and can be disruptive to sensitive electronic components.

Management of pharaoh ants is primarily through baits, although some success has been reported with slower-acting, non-repellent, residual insecticides like chlorfenapyr. Pharaoh ants often feed on sweets, but seem to more consistently prefer foods high in fat and proteins, like dead insects. In addition, pharaoh ants are well known for periodically changing their food preferences. For this reason, special baits have been designed to be especially attractive to pharaoh ants over different times of year. Use of baits specifically designed and labeled for pharaoh ants, such as MaxForce FC Ant Bait (fipronil) and Dual Choice (abamectin) Ant Bait Stations, is recommended. The Maxforce bait is protein-based, and the Dual Choice product contains both protein-based and carbohydrate-based bait.   Some liquid and gel carbohydrate-based baits are also labeled for pharaoh ants, and may sometimes be effective.  You can determine which bait is most likely to work in your situation by placing small amounts of test foods near the foraging trails to see which type(s) of food attracts the ants.  For example, you can use tuna or hot dogs for protein, sugar water for carbohydrates, and potato chips for fat.  The use of pyrethroid insecticide sprays against pharaoh ants is not recommended, as the repellent nature of these sprays appears to cause colonies to fragment and spread–making control more difficult.  Non-repellent sprays may be helpful especially outside of buildings in summer months, and for heavy indoor infestations.