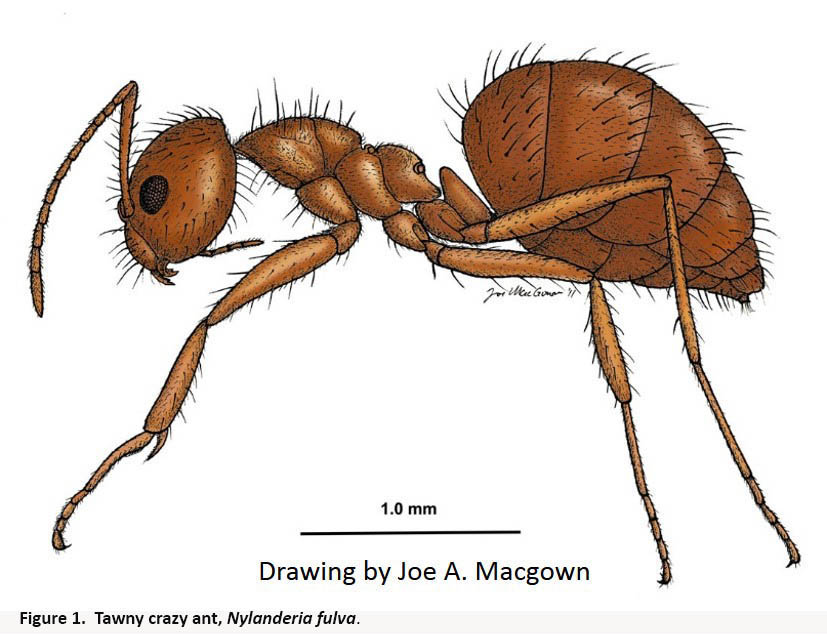 Tawny crazy ants (Figures 1-2) are fast becoming an economic, ecological and nuisance pest in the southern United States.  This ant, also known as the Caribbean crazy ant, hairy crazy ant and Rasberry crazy ant, has been a serious problem in parts of Florida and Texas for over ten years. It is spreading across the southeastern United States, most often through human assistance (refer to EDDMapS section below).  Huge numbers of this new ant can literally cover the landscape in industrial parks and residences. In 2012 the ant was officially identified as Nylanderia fulva (Mayr) by Gotzek et al., and given the approved common name the tawny crazy ant (fulva is the Latin word for tawny). While our understanding of the biology and management of the tawny crazy ant is increasing, much remains to be learned. 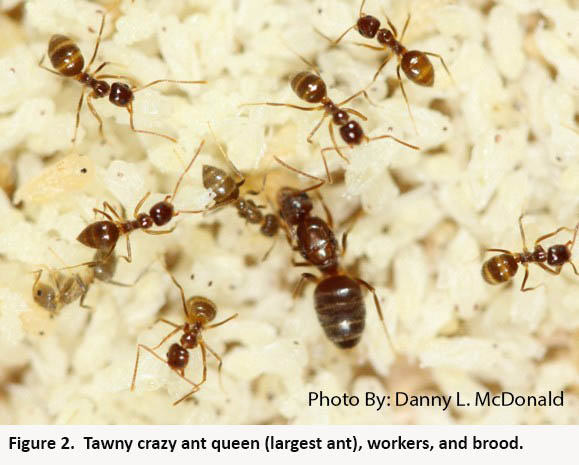 Impact: What do they do?

In infested areas, large numbers of tawny crazy ants have caused great annoyance to residents and businesses. In some situations, it has become difficult for residents to enjoy time in their yards. Companion animals may, in some cases, attempt to avoid the outdoors as well, and wildlife such as nesting songbirds, can be affected. The cumulative economic impact of this invasive ant species is currently unknown. 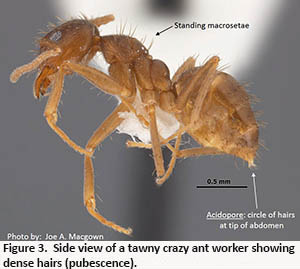 Biting and medical implications to people, livestock and wildlife:

Tawny crazy ants do not have a sting. In place of a stinger, worker ants possess an acidopore (Figure 3) on the end of the gaster (abdomen), from which they can excrete chemicals for defense or attack. They are capable of biting, and the bite may cause a minute sensation of discomfort that quickly fades.  Nylanderia fulva has been a serious pest in rural and urban areas of Colombia, South America. In this case, they reportedly displaced all other ant species and caused small livestock (e.g. chickens) to die of asphyxia. In Texas, cattle were attacked around the eyes, nasal fossae and hooves impacting overall health (August 2015 and June 2016 – suspected injury to new born calves in Brazoria, TX, Figures 4 and 5).

In areas infested by the tawny crazy ant, large numbers of ants have been observed to accumulate in electrical equipment, causing short circuits and clogging switching mechanisms resulting in equipment failure. In some cases the ants have caused several thousand dollars in damage and remedial costs. They have also been observed to infest automobiles, and have been implicated as the cause of damage to side-impact airbag sensors that rendered the devices faulty.

These ants show likelihood of being transported through movement of almost any infested container or material.  Thus, movement of garbage, yard debris, bags or loads of compost, potted plants, and bales of hay can transport these ant colonies by truck, railroad, and airplane. No information is available on potential yield effects in infested lands.

ants have been observed to accumulate in electrical equipment, causing short circuits and clogging switching mechanisms resulting in equipment failure. In some cases the ants have caused several thousand dollars in damage and remedial costs. They have also been observed to infest automobiles, and have been implicated as the cause of damage to side-impact airbag sensors that rendered the devices faulty.

Identification: How do I spot them?
Suspect tawny crazy ant if you see a lot of ants with the following general characteristics:

Distribution: Where are they found?

The tawny crazy ant has the potential to spread well beyond its current range in the southern United States. However, it is a semi-tropical ant and potential northern distribution could be limited by cooler weather conditions. It has been reported in Alabama, Florida, Georgia, Louisiana, Mississippi and Texas.

The EDDMapS mapping system for tawny crazy ant is available if you would like determine if the ants are present in your county.  EDDMapS web page: https://docs.google.com/spreadsheets/d/1I8AOBsVK97fJ2wvZwdhJg0o08-d-4BIH-rsaRCazRso/edit#gid=37973180.

Management: What can you do for them?

Many of the typical standalone methods of effectively managing other ants do not provide adequate control of the tawny crazy ant. Because colonies predominantly nest outdoors, reliance on indoor treatments is an ineffective approach to controlling these ants when foraging inside structures. Effective tawny crazy ant management requires a multi-tiered Integrated Pest Management approach that involves landscape modification, elimination of food sources, landscape treatment, and lastly, if necessary, barrier treatment for structures. In some states there exists a FIFRA Section 18 Quarantine Exemption Use label that allows perimeter application of Termidor® (BASF) 3-feet up and 10-feet out from the infested structure for management of tawny crazy ants.  Additionally, several insecticidal products are labelled to allow application wherever tawny crazy ants are observed to be active on a property.

It should be noted that chemical applications alone are not the answer.  They are part of the solution, and chemical applications by themselves will only give minimal reduction in the tawny crazy ant population. ﻿Good integrated pest management principles should be followed to obtain population reduction through habitat modification which will allow the chemical treatments to perform better.  Check with your local Cooperative Extension Specialist to obtain recommendations for chemical management strategies targeting the tawny crazy ant in your county.

Landscape Modification: Cultural control practices including the removal of harborage such as fallen limbs, rocks, leaf litter, potted plants, and just about anything contacting the ground that isn’t absolutely necessary should be attempted. Cultural control methods can also include altering the moisture conditions in a landscape. Tawny crazy ants prefer damp conditions, so reducing the amount of irrigation, repairing leaks, leveling low areas and improving drainage should help. You may need to alter your landscape, i.e., remove mulch, severely prune landscape plants where the ants prefer to forage and nest, and tend honeydew producing insects.

Elimination of Food Sources and Landscape Treatment: Populations of honeydew producing insects (i.e. aphids and scale insects) should be managed to reduce the availability of this food resource.  Often, products containing the active ingredient imidacloprid or other systemic neonicotinoids are a good option for managing these insects. Additionally, consider eliminating or relocating compost, pet food, etc. Periodic (follow intervals specified on the pesticide label) lawn treatment with a pyrethroid insecticide such as lamda-cyhalothrin will help to reduce foraging ants. A single application of a fipronil granular product may also be considered. We also suggest spraying 4-5 foot up each of the large trees on your property to help keep the ants from foraging into trees. Broadcast applications of the products should be made to the yard and other areas of the landscape. Be sure to check regulations in your area for restrictions to applications of a pyrethroid to landscaped areas. It is important that all areas be treated with an appropriately labeled product. Spot treatments are not successful.

For information on this ant from a specific state see links below:

Nylanderia fulva, from Ants (Formicidae) of the Southeastern United States

Videos on the tawny crazy ant that may be of interest: