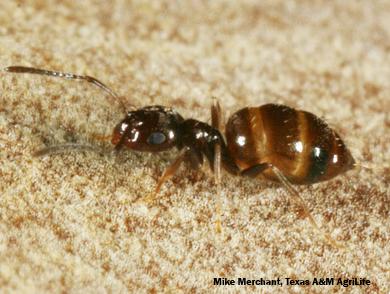 The dark rover ant, Brachymyrmex patagonicus, is a relatively new ant pest in the U.S. It is one of approximately 38 known species worldwide. There are about 10 species of rover ants in this country. The dark rover ant is one of the smallest indoor ant pest species.  Worker ants are about 2 mm long and are uniform in size (monomorphic). Its tiny size, dark brown color, and 9-segmented antenna distinguish this ant from other house dwelling (structure-invading) ants. Like other ants in the subfamily Formicinae, the dark rover ant has a single petiole node (hidden under the gaster) and ring of hairs around the tip of the gaster.

Native to South America, the dark rover ant was first widely reported by the U.S. pest control industry as a pest of structures in the early 2000s. Currently it is found in Georgia and all states bordering the Gulf of Mexico, as well as in urban areas of New Mexico, Arizona, California and southern Nevada.

Dark rover ant colonies are relatively small, ranging from a few hundred to a few thousand individuals.  Nests may be found in the soil, under leaf litter and mulch, in potted plants, bricks and wall voids.  Relatively little is known about rover ant feeding behavior, but they are thought to rely heavily on plant nectaries and honeydew (excrement) produced by insects that feed on plant sap.  They are also general scavengers. The Brachymyrmex genus is also thought to obtain honeydew from subterranean aphids and scales that feed on plant roots. They are mostly sugar-loving ants, but have seasonal feeding preferences, switching to rely more on protein-based foods in late summer and fall. 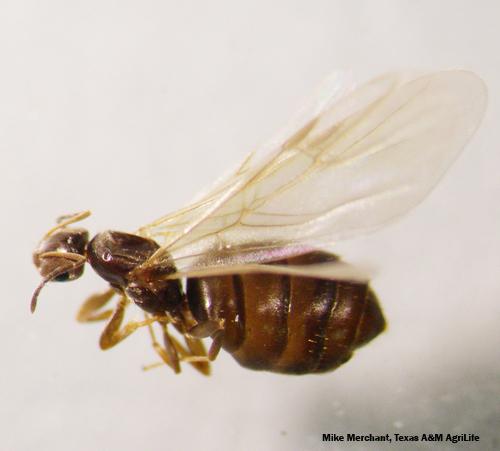 Rover ants do not sting, but are considered nuisance pests when they come indoors and forage on floors, counter tops and walls. They may be considered a public health risk in sensitive environments like hospitals and nursing care facilities. They can mechanically transmit the bacterium E. coli under laboratory settings.

During spring and summer, the reproductive (winged) caste of dark rover ant may emerge indoors. This is part of the seasonal mating behavior of ants, and may occur when a rover ant nest is located under the foundation, or in a wall of the structure. It is difficult to completely prevent these swarmers from entering your home.  These winged ants are not harmful and normally do not need control. They typically appear over a day or two, and go away just as quickly.

Because dark rover ant reproductives are about the same size (4 mm) as a termite, they are frequently mistaken for these more serious, house-destroying pests. Fortunately, termites and ants can be distinguished by close inspection. For more information on how to do this, see How can I tell if those are flying ants are termites?  If you still have doubts about whether flying insects in your home are termites or ants, you should contact a local termite control company or an extension entomologist in your state.

Rover ants are commonly found outdoors and may be seen in trails going up and down trees and following structural guidelines such as the joints and edges of sidewalks.

Dark rover ants are often found living closely with other pest ants including fire ants, tawny crazy ants and Argentine ants. Like the tawny crazy ant, dark rover ant can defend itself from fire ant venom by blanketing itself with protective formic acid. This defense mechanism probably allows the dark rover ant to coexist and possibly compete with fire ants.

Reports from pest management professionals indicate that control of dark rover ants is not easily achieved with standard residual insecticides or baits. Few studies have been done on the effectiveness of insecticides for control of these ants under actual field conditions. Most ant control programs rely on a combination of baiting strategies with applications of a residual insecticide barrier around the structure being protected. Keefer (2016) showed significant reduction in foraging rover ant numbers after treatment with several insecticides, most notably Demand CS (lambda-cyhalothrin).  Similarly, Miquelena and Baker (2014) showed best control with Demand CS and high volume applications of Arilon (indoxacarb). Fipronil, a commonly used ant control product, did not provide good control in their study. Other field and laboratory studies showed that among products applied as baits, MaxForce Quantum Gel Bait (imidacloprid) provided the best control. A combination of both residual sprays around structures and carbohydrate baits indoors appears to be the best management recommendation for pest control professionals at this time.

Homeowners attempting do-it-yourself control should try controlling indoor infestations of rover ants with liquid, sugar-based baits.  Several liquid ant bait products containing the active ingredients dinotefuran or boric acid are available over-the-counter, and can provide temporary control of these ants. Outdoor perimeter sprays applied to the soil and foundation around the home may help reduce ant numbers; however, repeated applications may be needed.

Trees or plants with infestations of honeydew producing insects (e.g., aphids, mealybugs, whiteflies, etc.) provide an excellent food supply for rover ants. You can recognize such plants by their shiny, sticky leaves, and/or the black residue (sooty mold) often seen on plant trunks and leaves. Treating such plants with an appropriate insecticide for sap-feeding pests will help reduce the ant’s food supply and supplement your other control efforts for rover ants.

Images: (top) Dark rover ant workers are tiny and may be found both indoors and outdoors during the summer; (bottom) The female reproductive form of the dark rover ant may be mistaken for a termite; however, note the pinched waist and unequal length wings typical of an ant. Photos by the author.