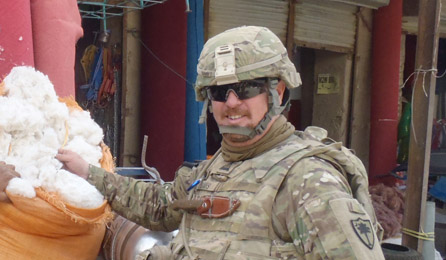 Tim Davis, PhD is an Agriculture and Natural Resources Agent and County Extension Coordinator in Chatham County with the University of Georgia.

Tim Davis began his career with Clemson University in 1990.  He spent three years as a Research Assistant at Sandhill Research and Education Center. During this time, he was involved in the peach tree program and screened rootstocks for nematode resistance as well as conducted experiments with delaying bloom.

In 1996, Tim became a county extension agent and worked to educate horticulture consumers in the midlands of South Carolina.  He was the Richland County Master Gardener Coordinator as well as the administrator of the Urban Horticulture Center at Riverbanks Zoo and Garden.

In 2001, Tim took up statewide duties conducting research and education as a fire ant specialist. This program includes screening new chemistries as well as working with biological controls for the Red Imported Fire Ant. Tim’s extension programs focus on integrating all of the available tools to obtain the best levels of fire ant control. His research has focused upon the ecological impacts of the ants of South Carolina. Tim’s expertise in fire ant research and Extension programs have been recognized world wide and have taken him to Argentina, Australia, and Taiwan.

In 2012 Tim took a leave of absence for Clemson Extension to serve as a subject area expert for a South Carolina Army National Guard Agriculture Development Team in the Helmand River Valley of Afghanistan. Since returning Tim works as the Richland County Commercial Horticulture Extension Agent.

Starting in July of 2016 Tim took a new position with the University of Georgia Extension where he serves as the Chatham County Agriculture and Natural Resources Agent and County Extension Coordinator.

Tim’s completed a PhD at Clemson in the Department of Entomology in 2009. His M.S. is from Clemson University in Entomology, and his B.S. is in biology with a zoology emphasis.