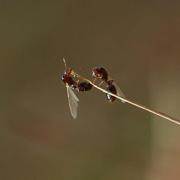 Most ant species, including fire ants, produce flying ants. Often called winged ants or alates, flying ants are fertile male or female ants that can mate.  Most of the ants in a fire ant colony are sterile, wingless female workers that cannot mate.

All males can fly. They are smaller than the winged females, and they have smaller heads, larger eyes, and a larger thorax.

A colony produces several hundred flying ants at a given time. Flying ants leave the colony together in a swarm, often during warm weather after a rain. Mating occurs in the air, usually with ants from other mounds. After mating, males drop to the ground and die, and mated females lose their wings, start new colonies, and become queens.