Imported fire ants are omnivores.  They eat both plants and animals to satisfy their nutritional needs.  Their menu includes carbohydrates (sugars), lipids (fats), and protein. Worker ants cannot ingest solid food particles (greater than 2 microns, 1 micron = 0.000039 of an inch), so they primarily feed on liquids. Only the last developmental stage of the fire ant larva (fourth instar) can convert solid food particles into a liquid that is then fed to other colony members.

How Do Fire Ants Find Food?

To search for food, foraging worker ants leave the nest or mound and wander randomly. Upon discovery of a food source, they head straight back to the colony, using their stingers to periodically mark the ground and leave a chemical pheromone trail (watch video). When they reach their colony or colony “outpost” (the end of a subterranean tunnel radiating away from the colony where forager ant “reserves” congregate), additional worker ants follow the pheromone trail to the newly found food source.  Those ants retrieve the food and return to the colony, also marking the pheromone trail laid down by the first group of ants. In a short period, many more ants follow the foraging trail, quickly arriving at the source and dominating the site to protect it from competitors.

Fire ant foragers are very effective predators. They have strong jaws or mandibles that bite and secure prey. Venomous stingers on the end of their abdomen can sting multiple times while injecting a toxic venom into prey. This enables fire ants to paralyze and kill animals much larger than they are. Once they immobilize their prey, the fire ants carry it back to the colony.  If the prey is large, the fire ants dismantle it into small, transportable pieces.  Fire ants will also eat other insects (like fly larvae) that feed on decomposing bodies (carrion). By eating the fly larvae, the ants can delay decomposition and dominate the food source.

Fire ant food preferences include a smorgasbord of plants, microscopic organisms, invertebrates (including arthropods), and  vertebrates (reptiles, birds, mammals).  Fire ant workers have been known to wander into dirty laundry, probably attracted to the sugars and/or oils that are soaked into clothing. In companion animal and wildlife areas, fire ant control may be required to reduce losses.

In some cases, other pests are prey for fire ants. This food-seeking behavior is considered to beneficial. Fire ants are known to prey on ticks and boll weevils. In other instances, the predatory behavior is can be a serious threat – as when fire ants go after songbirds or endangered or threatened species. In areas of fire ant infestation in the southern U.S., fire ants may be the most dominant predatory insect in the environment. Infestation of new areas, or removal of these exotic invasive fire ant species by any means, will undoubtedly have a profound effect of the flora (plant life) and fauna (animal life). 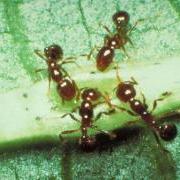 Fire ants, like many other ants, will feed on other food substances like the sweet liquid produced by special plant glands called nectaries; and also on the honeydew produced by sucking insects like aphids, whiteflies, scale insects, and mealybugs (see below). Fire ants tend the insects producing the honeydew by providing them protection from natural enemies (parasites and predators).  They also and eliminate diseased or unhealthy individuals, which allows the insects  to grow and flourish.  This can aggravate the problem caused by the insects in the first place and can result in over-use of pesticides in an attempt to control them.   Ant control is often part of the effort for managing sucking insect pests.

One of the best tools used to detect and monitor fire ants and other ant species is the use of slices of hot dogs as a food lure. Research on foods that attract foraging fire ant workers has led to development of effective granular bait products. Conventional fire ant bait formulations are made of processed defatted corn grit impregnated with soybean oil.  The soybean oil contains the active ingredient, or toxicant that kills the ant.  Fire ants feed on the oil and ingest the toxicant. 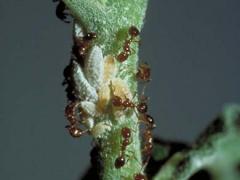 In the southern United States, the invasive imported fire ant, Solenopsis invicta, feeds on honeydew from grass-feeding mealybugs. Most important appears to be Antinina graminis, the Rhodesgrass mealybug. Researchers found more mealybugs closer to S. invicta mounds suggesting that mealybugs benefit as well. Mutual benefits derived by S. invicta and A. graminis are consistent with the hypothesis that associations among invasive species can be important in their success at introduced locations (from Helms, K. R. and S. B. Vinson. 2003. “Apparent facilitation of an invasive mealybug by an invasive ant”. Insectes Sociaux 50:403-404). 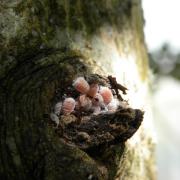 Imported fire ants can affect many parts of a plant. They cause economic losses to agricultural crops such as corn, sorghum and soybeans by feeding on germinating seeds, killing young corn by tunneling into the bases of young plant stalks, tunneling into potato tubers, and consuming developing okra and citrus fruit. In newly planted citrus plantations in Florida, worker ants in mounds around the base of young tree trunks can remove bark, causing girdling and killing the trees. Fire ants collect certain seeds while foraging. In some cases the seeds are eaten. In other cases (e.g., horse mint ) they do not consume the seed’s embryo, but rather scatter the seeds around their mounds.  This results in dispersal across the landscape, which could affect plant species distribution and abundance. 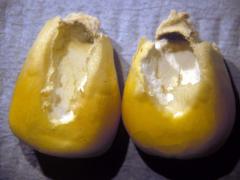 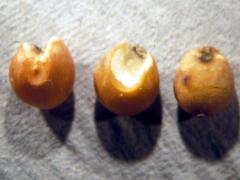 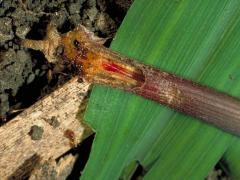 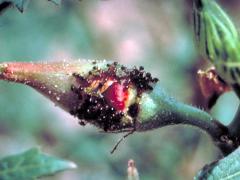 Scorpions and spiders: Red imported fire ant can prey on scorpions if they cannot escape attack. They can also feed on spider eggs laid in egg cases. 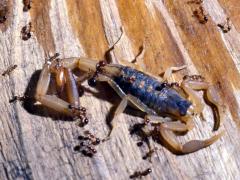 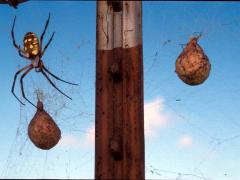 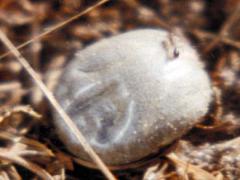 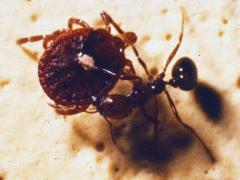 Insects:  Fire ants prey on many different life stages of various insects including flea larvae and cockroach eggs.  This helps reduce populations of these pests. They would readily eat termites, but the soldier caste in termite colonies defends the colony while the worker termites seal any holes in the colony walls made of carton, a mixture of chewed food and saliva (see a YouTube video of fire ants fighting a soldier termite). However, many animals rely on insects as a food source, including many birds such as young quail and prairie chickens, which feed on insects before they begin feeding on grains. When fire ants consume food such as grasshoppers, they may indirectly affect the health and survival of these species. Fire ants also directly attack weakened honey bee colonies and may need to be managed to prevent losses. Imported fire ants attack other ant species and raid their colonies, but not necessarily as a food source (see video of red imported fire ants fighting a tropical fire ant, Solenopsis geminata). These exotic invasive fire ant species have displaced native fire ant species as they expanded their geographic range. Fire ants also eat dead insects.  This research has led to one ant bait product that is produced from ground up silkworm pupae! 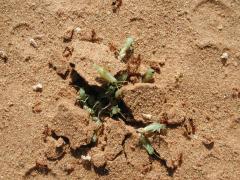 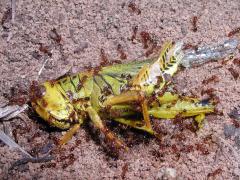 Caterpillars and other insects: Imported fire ants prey on all stages of developing butterflies and moths: eggs, caterpillars, pupae and adults (when they can catch them!). Some of these caterpillars are serious agricultural pests of cotton and sugarcane and therefore the ant’s activities are beneficial, providing biological control. However, when fire ants prey on butterfly caterpillars, their activities are considered to be a problem (See Fire Ant Project Fact Sheet, Managing Fire Ants in Texas Schoolyards and Butterfly Gardens). 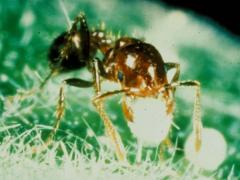 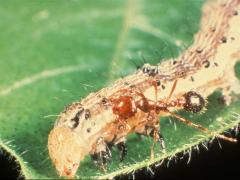 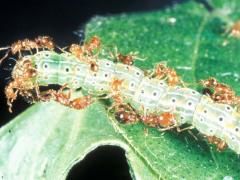 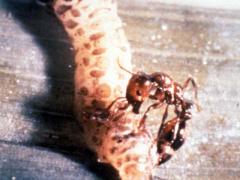 Green lacewing eggs: One organism commonly used for biological control of aphids, mealybugs and other pests is the predaceous green lacewing larva, often called an aphid lion. Companies selling this biological control agent can provide winged adults, larvae1, or eggs2 glued onto cards. The cards can be placed around plants to control pests.  If imported fire ants are present, they will consume all of the eggs glued to the cards (see image below where the left one side was shielded from ant predation using a microscope slide). Thus, fire ant control may be necessary to achieve successful biological control using this natural enemy.
1 the predaceous feeding stage with sickle-like mouthparts that pinch prey and suck out the haemolymph or insect blood of the prey
2 normally laid on stalks which helps prevent cannibalism by hatching larvae 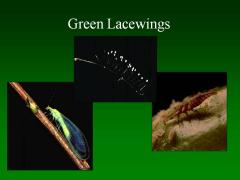 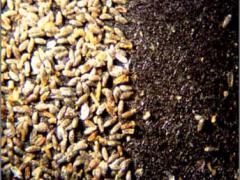 Reptiles and amphibians: Reportedly, fire ants will attack all stages of development of snakes, lizards, turtles and crocodiles.  These animals are most vulnerable during and shortly after hatching. Red imported fire ants are thought to have dramatically reduced population levels of the Texas horned lizard either through direct predation of hatching lizards or eliminating the lizard’s major food source – the red harvester ant. Alternately, insecticides used to treat for fire ants may have eliminated the red harvester ants. Other factors, such as elimination of horned lizard habitat by land use (subdividing ecosystems into smaller parcels of land with multiple uses), cultivation, urbanization and introduced predators (cats and dogs) are other possible factors in the declining horned lizard population levels (in east Texas and elsewhere). 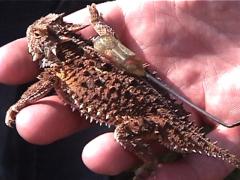 Birds: Birds, particularly those nesting on or near the ground, are vulnerable to fire ant predation. In some cases, such as colonial waterbirds, ants directly prey on hatching eggs. Fire ants have reduced the overall survival of nestling songbirds in Texas. When a chick first punctures the egg shell as it starts to hatch, yolk from the egg attracts foraging worker ants.  The worker ants quickly alert other ants to the food source. Soon, fire ants overrun the nest and sting the chick to death.

In other species, such as quail and prairie chickens, fire ant stings to young birds seems to be more of a factor than egg predation. Stinging debilitates the young birds to the point that they cannot keep up with the mother bird, thus reducing the young bird’s chance for survival. Finally, fire ants can prey upon the insects young birds depend on for food, as described above. Chickens in poultry operations can be affected by fire ant predation. Those that survive may have blemishes on their skin from fire ant stings that reduce their market value. Thus, fire ants are frequently controlled around these operations. 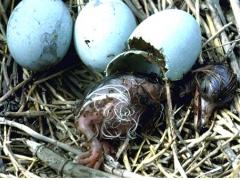 Mammals: Rodents, particularly those that nest in one place (rather than moving nests frequently when disturbed) may be particularly vulnerable to imported fire ant predation. Foraging ants recruit to moisture and softer tissues of newly born animals and bite and sting them multiple times. Reduction in rodent numbers may indirectly affect other animals that rely on rodents as a food source, including raptors (e.g., hawks, owls) and other predators (e.g., bobcats).

Deer fawns born near fire ant mounds, particularly during warmer months of the year, are vulnerable to fire ant attack because they instinctively hide and remain still while the mother forages for food. Ants sting their eyes, causing blindness and dramatically reducing chances of survival. Although heartbreaking, deer population levels continue to increase in many areas where fire ants occur.

In cattle operations, imported fire ants injure or kill newborn calves by stinging soft moist tissues including the eyes. Calves that have been attacked by fire ants will lick ants from their skin.  This is the reason many ants are found in their digestive systems at necropsy. This is just one of the costs of imported fire ants to cattle producers, according to a 1994 survey of Texas veterinarians. 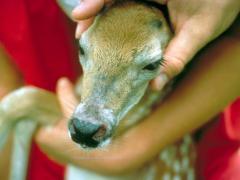 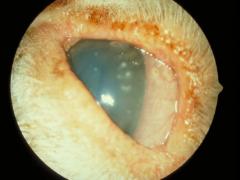 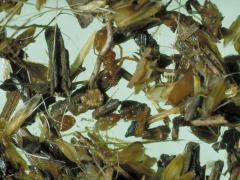 Carrion: Fire ant workers are often found feeding on dead animals (carrion). Whether or not the fire ants killed the animal cannot often be determined confidently.  Images of a dead newborn rabbit illustrate how imported fire ants exploit this food resource over time (photos by B. M. Drees). 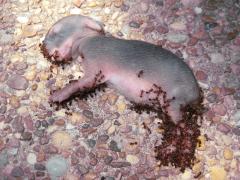 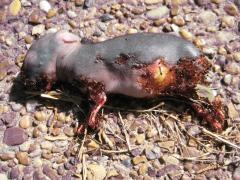 Lofgren, C. S. 1986. The economic importance and control of the imported fire ant in the United States in The Economic Impact and Control of Social Insects (S. B. Vinson, ed.). Praeger Press, N.Y.