The word “imported” in the approved common names of the fire ant species was probably a poor choice, because “imported” typically suggests that the ants were brought  into the United States on purpose. On the contrary, imported fire ants were accidentally introduced via trade ships traveling from South America, their native home, into the Port of Mobile, Alabama. 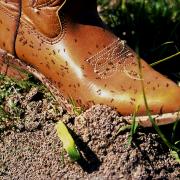 The “fire ant” part of the name refers to the burning sensation you feel when you get stung, especially by several ants at once. With most people, the immediate burning sensation goes away in a few minutes. A day or so later, the fire ant’s unique venom forms a white fluid-filled pustule, or blister, at the sting site.