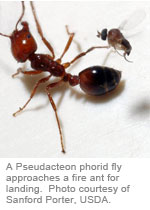 No, Pseudacteon phorid flies cannot sting or bite, because they do not have stingers or biting mouthparts, nor are they attracted to humans or pets.