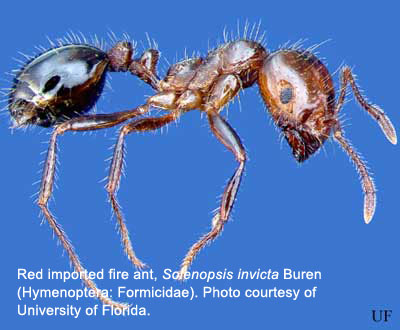 Imported fire ants are ant species in the genus Solenopsis that can cause serious medical, economic and ecologic problems. They are called imported fire ants because they are not native to the United States.  They were accidentally introduced from South America.

Imported fire ants interfere with outdoor activities and harm wildlife throughout the southern United States and elsewhere. Ant mounds are unsightly and may reduce land values.

Although fire ants do prey on flea larvae, chinch bugs, cockroach eggs, ticks, and other pests, the problems they cause usually outweigh any benefits in urban areas.

While it may not be possible to eradicate fire ants, controlling them is highly desirable. The best control programs use a combination of non-chemical and chemical methods that are effective, economical, and least harmful to the environment.

Where are Fire Ants