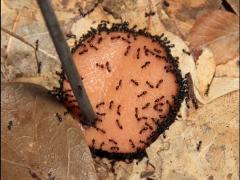 The little black ant, Monomorium minimum (Buckley), is aptly named. Workers are small (1.5 – 2 mm), shiny, and dark brown to jet black in color. They have 12 segmented antennae with the last 3 segments forming a club. Queens are slightly larger and may have wings during mating season (June to August). This ant is native to North America, and can be found in Southeastern Canada and throughout the Eastern and South-central United States to Mexico.  Like most other ants, this species lives and nests primarily outdoors, but will also forage indoors. Nests with hundreds to thousands of workers and multiple queens can be found in all types of decaying wood, from trees to fences, and associated with piles of rocks, bricks, or other debris. They can also nest under any large object and in landscape mulch. If they move indoors, they nest in wall voids, cracks in foundations, and even in cabinets.

Little black ants feed on a variety of sugars and proteins including candy, fruit, honeydew, nectar, pollen, insects, oils, corn meal, and meats. They can form trails and recruit other workers to a food source using a chemical pheromone. Trails tend to have fewer ants than, for example, Argentine ant trails, and the ants appear to wander slowly rather than in a quick and direct manner.

Direct treatment of nests is the most effective method of controlling the little back ant. Outdoors, nests can be treated with residual insecticides including liquids and aerosols; dusts and aerosols are most effective indoors. Insecticidal baits are effective if the nests cannot be located. Since little black ant colonies will feed on sweets and proteins, and can change preferences between the two, pre-baiting with a sugar and a protein can inform the decision about what type of bait to use for control. As with all insecticides used in baits, the active ingredient needs to be non-repellent, slow acting, and toxic at very low concentrations.

More information on managing ant pests can be found at Integrated Pest Management for Ants.

More information about little black ants can be found at: