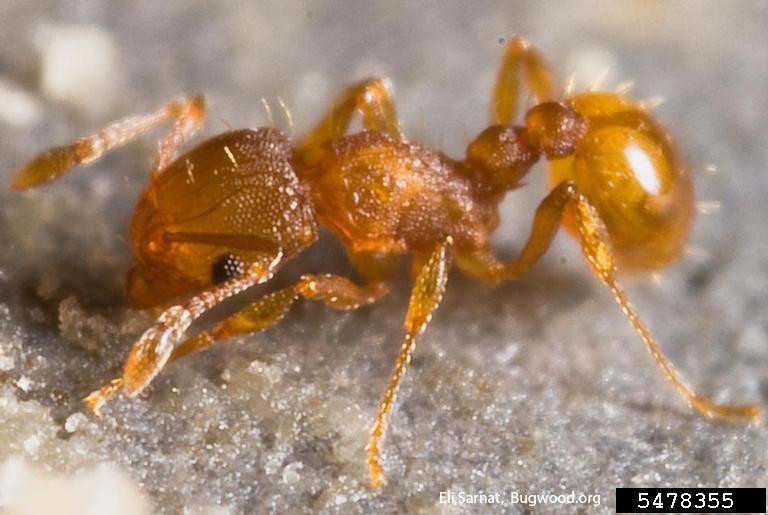 The little fire ant, Wasmannia auropunctata (Roger) or LFA, is a very small invasive ant species originally from south America.  Over the past century or so, they have been spread by human commerce to Florida and Hawai`i, Israel, west Africa, the Caribbean, Australia and many islands in the Pacific region.  Although less than 1/16th of an inch in length, LFA pack a powerful sting which can cause swelling and pain for humans and other animals.  LFA was first found in Hawai`i in 1999.  They are also found in parts of Florida.

Unlike many other pest ant species, LFA form nests in trees as well as the ground layer.  Once established, their population can reach as high as 90 million ants per acre.  The tree-dwelling ants are easily dislodged when foraging and can fall down on people and animals beneath.  They become entangled in clothing and fur, eventually stinging.

Little fire ants are very different from the Red Imported Fire Ant (RIFA) that plagues the southern states of USA.  First, they are much smaller – LFA are about 1mm in length compared with RIFA at 8-12mm.  Second, LFA like to nest in trees as well in the soil.  Red imported fire ants typically nest in the soil, but can nest in wall voids.  Third, LFA prefer shady and moist environment while RIFA like open sunny locations.  Finally,  little fire ants do not build obvious mounds.  They have much smaller diffuse nests located in convenient spaces such as hollows, in litter or under stones.

Controlling Little Fire Ants can be very difficult because each colony has many queens which helps them recover very quickly.

History of Little Fire Ants and their spread in Hawai`i

The Hawai`i Invasive Species Council has a page on LFA

The IUCN has a page dedicated to this species

How to control Little Fire Ants