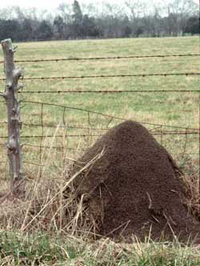 Many aspects of imported fire ants can be beneficial, but they can cause many problems.

Impact of Fire Ants on Wildlife

In areas where fire ant populations are very high,

Impact of Fire Ants on Agriculture

Impact of Fire Ants on Fish

Autopsies of fish have shown that their stomachs were packed with flying (winged) imported fire ants. As noted in the answer to the question “Why do flying fire ants land in my swimming pool?” flying ants are attracted to the reflective surfaces of the water. Thus, fire ants can provide an abundant food supply for fish. When fish consume many fire ants, the large quantity of food and the venom from stings could combine to cause the kills.

More research is needed to definitively answer this question. Frequent reports attribute fish kills to fire ants, but debate continues as to whether fire ants actually cause the fish kills. Most of the reports are unfounded, but a few cases have been verified.