Imported fire ants live in colonies in the soil. If a colony is flooded during a rainstorm or other high-water situation, the ants cling together and form a living raft that floats on the flood waters. Once the raft hits dry ground or a tree, rock, or other dry object, the ants can leave the water.

A research study published in 2011 determined how the ants stay afloat and maintain the raft. 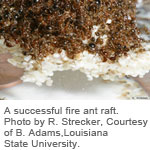 Colonies with brood (immature fire ants) are more likely to survive than colonies without brood. Colonies with brood can float in the raft formation for up to 12 days. Rafts with no brood usually sink within hours. Older larvae and pupae are  kept at the bottom of the raft, where they help the raft stay afloat. The oldest ant larvae have hairs that are especially effective in holding bubbles.

The following video from the antlabGT YouTube channel demonstrates how hard it is to sink a fire ant raft: